India is finding itself in a tricky situation between its two neighbours Bangladesh and Myanmar over the issue. 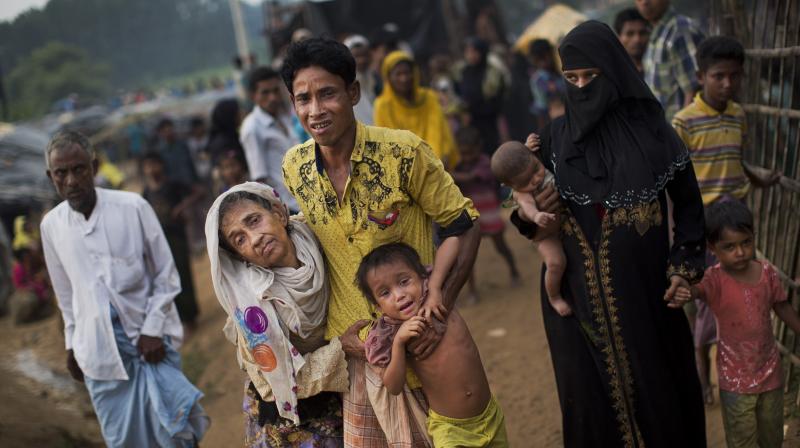 An exhausted Rohingya helps an elderly family member and a child as they arrive at Kutupalong refugee camp after crossing from Myanmmar to the Bangladesh side of the border. (Photo: AP)

New Delhi: After a concerned Bangladesh high commissioner in New Delhi met foreign secretary S. Jaishankar on the Rohingya crisis in Myanmar’s Rakhine state on Saturday, India issued a statement late in the evening saying it “remains deeply concerned about the situation in Rakhine and the outflow” of Rohingya refugees, adding — in a message to Myanmar without naming it — that the issue should be handled with “restraint and maturity”.

New Delhi also said there should be a focus on “the welfare of the civilian population” in Rakhine “alongside those of the (Myanmar) security forces”, adding that it is “imperative that violence is ended and normalcy is restored expeditiously”.

India is finding itself in a tricky situation between its two neighbours Bangladesh and Myanmar over the issue.

In a statement, the ministry of external affairs (MEA) sought to balance it out by saying India had earlier “strongly condemned the terrorist attacks on the Myanmar security forces in Rakhine”, adding that Prime Minister Narendra Modi, during his recent visit to Myanmar, expressed concern over the casualties suffered by the security forces and the loss of innocent lives. The statement also pointed out that PM Modi had “urged a solution based on respect for peace, communal harmony, justice, dignity and democratic values”.

In a move that could be seen as growing unease in Dhaka over the clashes between the Rohingya Muslims and the Myanmar Army, and the allegations of human rights violations by Myanmar’s security forces on the Rohingyas there as also the exodus to Bangladesh, Bangladesh high commissioner Syed Muazzem Ali met foreign secretary S. Jaishankar amid speculation that Bangladesh wants India to put pressure on Myanmar to resolve the situation.

New Delhi, however, has to be cautious since Prime Minister Narendra Modi has just completed what is seen as a successful visit to Myanmar during which India expressed its support to the south East Asian neighbour.

Agency reports say Bangladesh, which is facing an influx of Rohingya Muslims from Myanmar, has explained its situation to India. The Bangladesh envoy also talked about the need for the international community to pressurise Myanmar to address the exodus, sources in the Bangladesh high commission were cited by news agencies as saying.