The home ministry is also coordinating with the Cabinet Secretariat to ensure relief and rescue measures are put in place in the affected states. 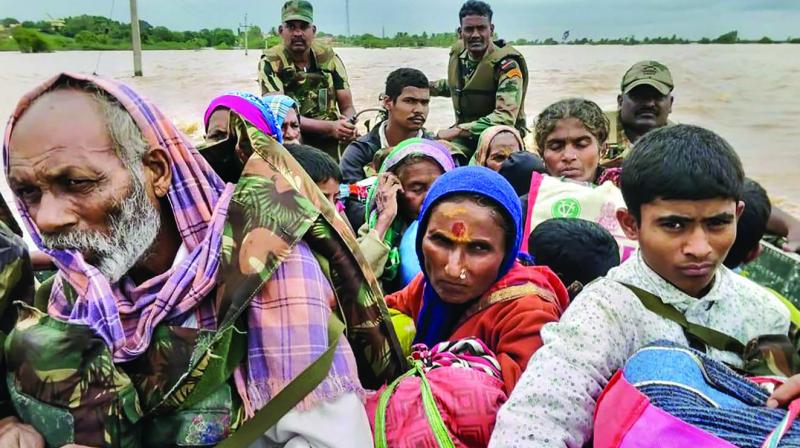 Army personnel carry out a rescue operation in a flood-affected area in Belgaum district on Friday. (Photo: PTI)

New Delhi: The Centre is closely monitoring the flood situation in some of the worst-affected states such as Maharashtra, Kerala, Karnataka and Gujarat, with minister of state for home affairs Nityanand Rai chairing a high-level meeting on Friday with all agencies concerned.

The home ministry is also coordinating with the Cabinet Secretariat to ensure relief and rescue measures are put in place in the affected states. On Thursday, Cabinet Secretary P.K. Sinha had also chaired a meeting of the crisis management centre to review the flood situation. During the meeting, the chief of National Disaster Response Force (NDRF) said that, so far, 83 of its teams had been dispatched to the flood-affected states while more had been kept on standby for emergency situations. The NDRF is working closely with the Army, Navy and the Air Force, which has also deployed as many as 173 teams to assist in relief and rescue operations. Four separate control rooms have been set up to closely monitor the situation as some parts of Gujarat, West Madhya Pradesh and East Rajasthan are likely to receive heavy rainfall till Saturday, which could exacerbate the situation.

According to the home ministry, multiple agencies have so far evacuated 82,000 people, shifting them to different relief centres set up by their respective state governments while another 2,325 people have been rescued. Home minister Amit Shah is in touch with senior officials, directing them to take necessary preventive measures arising out of the South-West monsoon.

Mr Rai also instructed all agencies concerned to ensure that any request from the affected states should be attended to immediately. Some parts of the country are facing battering flood conditions.

According to home ministry officials in Kerala, more than 20 people have been killed due to heavy rains while 22,000 people have already been shifted to various relief camps.

Similarly, in Maharashtra, over two lakh people have been evacuated in the worst affected districts of  Sangli, Pune, Kolhapur, Solapur and Satara.