The security forces are looking to ease some restrictions before Id so that people are able to come out. 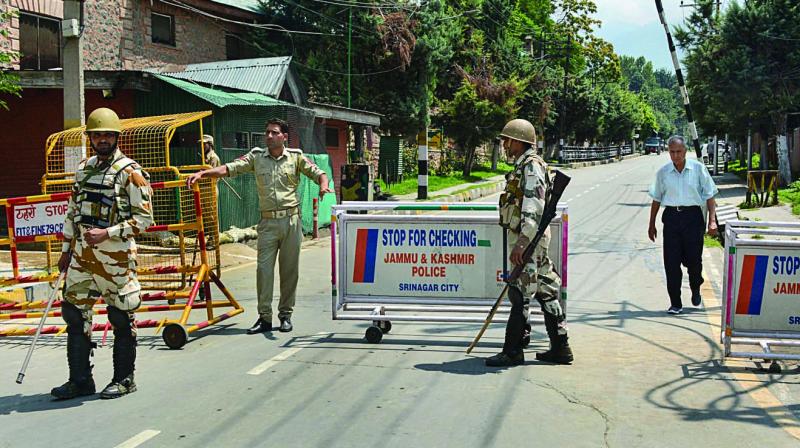 Security personnel stand guard as they block a road leading to the residence of Farooq Abdullah and Omar Abdullah in Srinagar on Thursday. (Photo: PTI)

New Delhi: The focus of the security establishment in Kashmir is now to ensure a peaceful celebration of Id which is likely to fall on Monday.

The security forces are looking to ease some restrictions before Id so that people are able to come out.

“The restrictions will be eased slowly. Each step will be analysed, see its reaction on ground, before taking the next step,” said a senior official. The security forces are also looking to allow landline and mobile if situation does not deteriorate.

Security forces are in contact with priest of the mosques, influential people in the area and senior citizens so that prayers are allowed in mosques on Id. The discussion is on how to prevent miscreants from carrying out trouble during and after the prayers so that things dont go out of hand.

“We are also seeing to allow prayers in Jamia Masjid mosque in Srinagar. But some restriction will be put so that not a very large congregation is there which becomes uncontrollable,” said the official. The decision on allowing prayers in Jamia Masjid will be finally taken only on Monday itself depending upon the situation, said sources.

On Friday authorities had allowed people to offer Friday prayers in local mosques. However, according to media reports prayers were not allowed in Jamia Masjid in Kashmir on Friday.

“The situation in Kashmir on Friday was mostly peaceful. There were few incidents of stones throwing but it was mostly sporadic in few areas,” said sources.

Prime Minister Modi on Thursday had said that people of Jammu & Kashmir will be able to celebrate Eid without any difficulties.

He had assured that government is providing all possible help to those from J&K who live elsewhere and want to return home to celebrate the festival.