India   All India  10 Aug 2018  Watch: IKEA opens store in Hyderabad and there was almost a stampede
India, All India

Watch: IKEA opens store in Hyderabad and there was almost a stampede

Around 40,000 people visited IKEA's Hyderabad store on the day it was open for public. 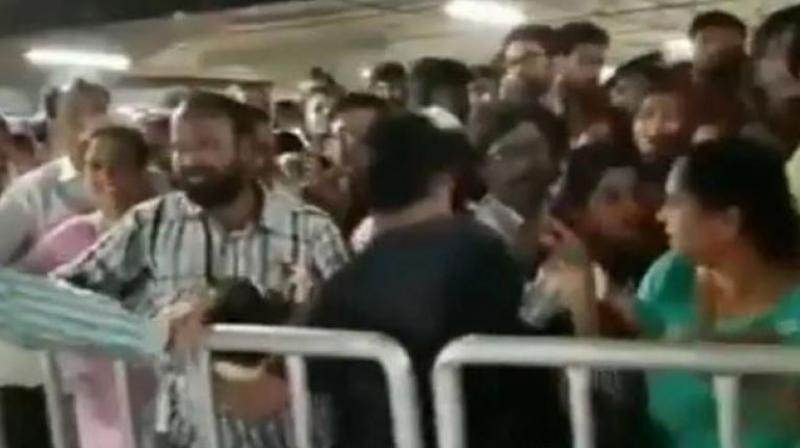 On its opening day, the store witnessed a stampede like situation as scores of people were waiting impatiently to take a sneak peek of the store. (Photo: Screengrab | ANI)

Hyderabad: The much-awaited Swedish home furnishing behemoth IKEA opened its doors in Hyderabad a first in India on Thursday.

Spread over 4 lakh square feet, the store has a grand cafeteria that can seat 1,000 people and a range of over 7,000 products spread into two floors.

On its opening day, the store witnessed a stampede-like situation as scores of people were waiting impatiently to take a sneak peek of the store.

Around 40,000 people visited IKEA's Hyderabad store on the day it was open for public.

In the video, people standing in long serpentine queues were seen pushing each other and grabbing the products showcased in the store.

Speaking to news agency ANI, IKEA's Managing Director for Telangana John Achillea said, "I am so excited today, we can see so many customers visiting in the building. It's just a phenomenal feeling."

The sprawling store has come up in the heart of Hyderabad Information Technology and Engineering Consultancy City (HITEC) close to the posh localities, the store appears to be designed to target upper middle-class and the rich, though the store promises something for everyone, irrespective of their spending capacity.

IKEA, which has stores in 49 countries, has a mixed global range with the local needs and realities.

The store would house 7,500 products and will be operational from 10 am to 11 pm every day of the year.

The first India store was opened five years after IKEA received government approval in 2013 to invest Rs 10,500 crore to open 25 stores in India by 2025.

IKEA has so far employed 950 people, 90 per cent of them locals and nearly 50 per cent women.

IKEA's next store will open in Navi Mumbai in 2019, followed by Bengaluru and Delhi. In the next phase, IKEA would cover Ahmedabad, Surat, Pune, Chennai and Kolkata.