Ansari had said that there is a feeling of unease and a sense of insecurity among Muslims in the country. 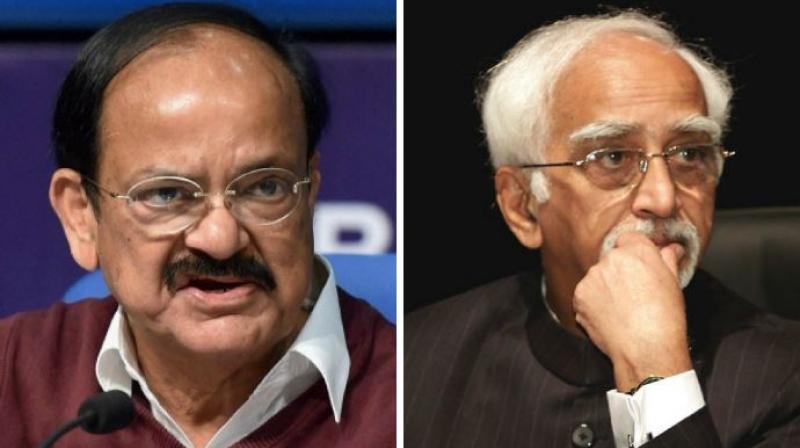 Ansari's remarks come against the backdrop of incidents of alleged intolerance and violence by self-proclaimed cow protectors, for which opposition parties have attacked the central government. (Photo: PTI/File)

New Delhi: The BJP on Thursday criticised outgoing Vice President Hamid Ansari for his comment that there was a sense of insecurity among Muslims and said such a "petty" remark was not expected from someone in his position.

"I condemn his comments. He has made political comments as he is retiring. He is still a vice-president and such comments do not suit his office's dignity. It seems he is making such comments to find political shelter after retirement," Vijayvargiya said.

Nobody expects such "petty comments" from a person holding such a high post, he added.

Vice-President elect M Venkaiah Naidu, a day before his swearing-in ceremony, also said that the agenda of politics should be development, while also adding that India is the most tolerant country in the world.

"India is the most tolerant country. Indian ethos is of mutual respect for each other. People try to use minority issues for political purposes," he said, in an apparent attack on Ansari.

"Unfortunately, some people are trying to blow it out of proportion and trying to defame India, raising it to national forum," he added.

Ansari, whose second five-year term as the vice president ends on Thursday, has said in an interview that there is a feeling of unease and a sense of insecurity among Muslims in the country, claiming that the "ambience of acceptance" is now under threat.

Ansari's remarks come against the backdrop of incidents of alleged intolerance and violence by self-proclaimed cow protectors, for which opposition parties have attacked the central government.