India   All India  10 Jul 2020  Supreme Court seeks response from Centre and Kerala on cruel practices against animals
India, All India

The plea has also sought issuance of guidelines for creation of Standard Operating Procedures (SOP) to tackle such incidents. 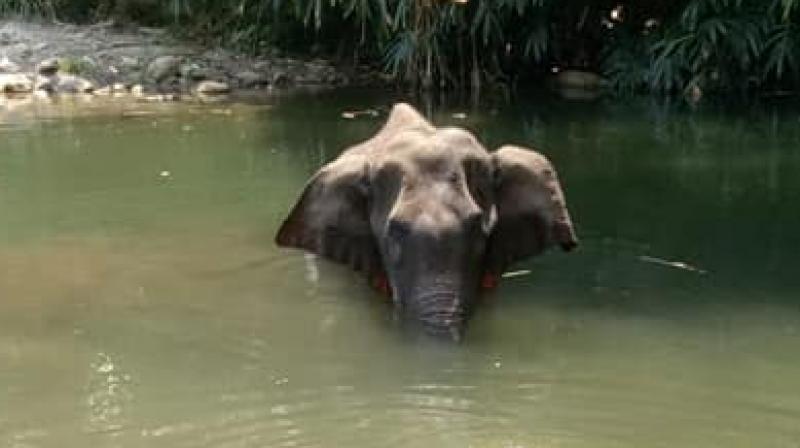 The elephant that was killed in Kerala. (image courtesy: Mohan Krishnan/Facebook)

New Delhi: The Supreme Court on Friday sought response from Centre, Kerala and 13 other states on a plea challenging the barbaric practices to ward off wild animals terming them as illegal and unconstitutional and violating Article 14 and 21 of the Constitution.

The plea filed by an advocate has also sought issuance of guidelines for creation of Standard Operating Procedures (SOP) to tackle such incidents and filling up of vacancies in forest forces across the country.

A bench of Chief Justice S A Bobde and Justices R Subhash Reddy and A S Bopanna issued notice to Centre and 13 states including Kerala and sought their responses.

The petition sought declaration of the practice of using barbaric means/snares/shaved sticks/explosives to ward off wild animals as illegal, unconstitutional, and violative of Articles 14, and 21 of the Constitution.

Petitioner Subham Awasthi in his plea has referred to an incident of Kerala, where a pregnant elephant recently died after eating a pineapple stuffed with firecrackers, offered to her allegedly by some locals.

Besides, Kerala other States which are made party in the petition include Andhra Pradesh, Assam, Chhattisgarh, Jharkhand, Karnataka, Meghalaya, Nagaland, Odisha, Tamil Nadu, Tripura, Uttarakhand and West Bengal.

Awasthi said that the incident which happened in Kerala and hundreds of incidents like it are waiting to unfold in various parts of country due to the dubious practice of using snares to scare wild animals.

It is quite pertinent to mention here that such practices happen due to lack of scientific involvement and awareness about Animal Human Conflicts and lack of information about other ways of dealing with it. Furthermore, there is an acute shortage of staff in Forest Forces to effectively manage this, the plea filed through advocate Vivek Narayan Mishra said.

He referred to various scriptures in Hinduism, Jainism and Buddhism religions, which prohibited cruelty against animals and said, the cruelty with which elephants are treated nowadays is a far cry from what it was like in ancient India where they had pride of place. No army could be imagined without elephants leading the charge.

On May 27, a pregnant elephant succumbed to injuries caused by the eating of a Pineapple filled with crackers which was left by the villagers/farmers/local men to ward off wild animals straying into the area which had their fields/property. It was again reported that this was not an isolated incident as another Elephant had died due to similar circumstances in Kerala, the plea said.

It is quite a common practice to scare off wild animals or scare wild boars/Nilgai etc by using food stuff filled with crackers as a bait as the damage caused by these animals at times is severe and there happens to be no means to stop it. The Forest department across India has failed in this endeavour to protect the Wildlife and Humankind due to a severe shortage of staff and lack of scientific measures being used by general populace, the plea said.

It referred to Centre's 1992 initiative Project Elephant under which different varieties of rice were cultivated in association with Central Rice Research Institute which was not eaten by Elephants and was thus left untouched.

It is submitted that similar simpler tools need to be developed to counter the menace of Wild Boars/Nilgais/Other Animals so that the farmers/villagers/local residents do not use such barbaric means to ward off Wild Animals, it said.

The plea said that several nations have banned or restricted the practice of usage of such barbaric means to minimise damage caused due to Human Wildlife Conflicts but the fundamental rights of Indian citizens and wild animals are being violated continuously, despite reforms introduced by the legislature.

The practice of using shaved sticks, fruits/food filled with crackers, snares to ward off animals is antithetical to India's obligations towards the fulfilment of fundamental rights of the Animals, it added.

It sought directions to the Centre and the State governments to update their forest forces with modern equipment and necessary literature required to fulfil their duties to the absolute best.

Besides other reliefs, the plea sought direction to Centre and the States to issue guidelines for the tracking of Elephants in order to save them from the threat of extinction and cruelty against them.