The apex court said that a probe against her will proceed and she will face the trial after a charge sheet has been filed. 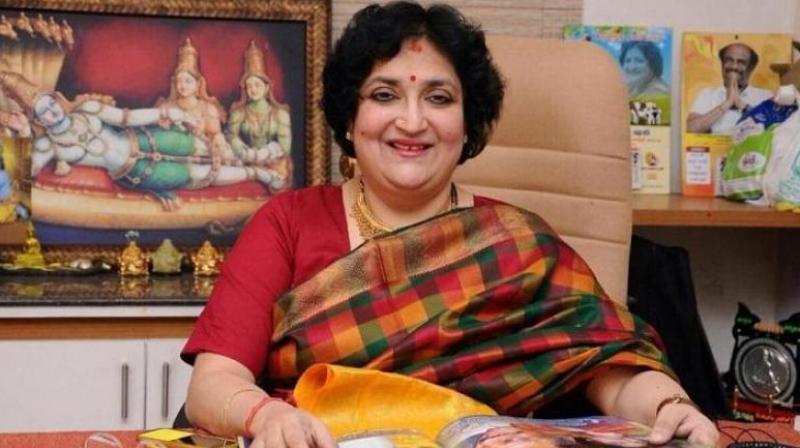 Last week, the Supreme Court pulled up Latha Rajinikanth for not honouring the undertaking given to the court to pay the dues of Rs 6.20 crores to Ad Bureau. (Photo: Latha Rajinikanth/Facebook)

New Delhi: Superstar Rajinikanth’s wife, Latha Rajinikanth, will have to face trial in a case of fraud after he failed to pay dues to an advertising company, the Supreme Court ordered on Tuesday.

The apex court said that a probe against her will proceed and she will face the trial after a charge sheet has been filed, reports said.

Last week, the top court pulled up Latha Rajinikanth for not honouring the undertaking given to the court to pay the dues of Rs 6.20 crore to Ad Bureau, which had given Rs 10 crore loan for the production of the film `Kochadaiyan’ directed by her daughter Soundarya Rajinikanth.

In February, Latha's lawyer gave an undertaking in the court that if her firm does not pay in three months, she will be personally liable to pay Rs 6.2 crore to the advertising agency. However, on July 3, the lawyer for her firm Ilam Bharathi Subbiah and Balaji Srinivasan offered to give a cheque of only Rs 10 lakh.

The bench had passed this order on an appeal filed by Ad Bureau against Karnataka High Court judgment quashing the criminal proceedings against Latha and her daughter.

The dispute dates back during the production of a Rajinikanth’s film. Latha had sold the post-production work of the film in which the petitioner was given exclusive distribution rights for Tamil Nadu, providing for 12 per cent pre-release guaranteed profit.

Counsel for Ad Bureau submitted that out of the total dues of Rs 14.90 crores, a sum of Rs 8.70 crores had been received and a balance of Rs 6.20 crore with interest was due from Latha.

However, counsel for Latha disputed this.