The convicts had challenged the validity of the dying declaration and claimed that there were discrepancies in her statement. 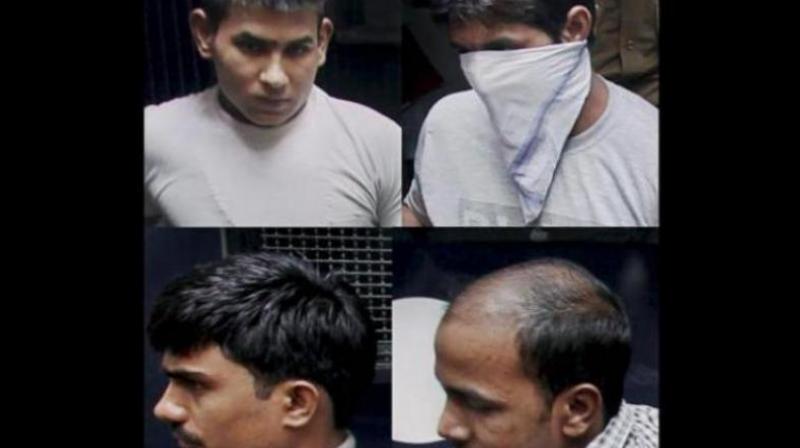 The Supreme Court dismissed the review petitions filed by three of the four convicts Mukesh (31), Pawan Gupta (24) and Vinay Sharma (25), saying no ground has been made out by them for a review of the top court verdict of May 5 last year. (Photo: File)

New Delhi: The Supreme Court reiterated on Monday that the three sets of dying declarations by Nirbhaya - the woman who was gang-raped in Delhi on December 16, 2012 - including the one made through gestures, were "true, voluntary and consistent".

A bench headed by Chief Justice Dipak Misra said the trial court, high court and the Supreme Court elaborately considered the dying declarations during the trial of the case and the convicts could not be allowed to raise the same issues again.

"All the three dying declarations having been relied (on) by trial court, high court and this court and all arguments attacking the dying declarations having been considered and rejected, in its judgment dated May 5, 2017, we are of the view that the petitioner cannot be allowed to re-agitate the same issues which were already considered and expressly rejected by this court," the bench, also comprising Justices R Banumathi and Ashok Bhushan, said.

The Supreme Court dismissed the review petitions filed by three of the four convicts Mukesh (31), Pawan Gupta (24) and Vinay Sharma (25), saying no ground has been made out by them for a review of the top court verdict of May 5 last year.

The three dying declarations made by Nirbhaya were recorded.

The first declaration was recorded by a doctor when she was admitted to hospital on the night of December 16, 2012 and the second on December 21 by a sub-divisional magistrate during which she gave exact details of the crime.

The third declaration was recorded by a metropolitan magistrate on December 25 and was mostly through gestures.

It also rejected the claim of one of the convicts, Vinay, that he was juvenile at the time of the incident.

The convicts had challenged the validity of the dying declaration and claimed that there were discrepancies in her statement.

With regard to the second declaration, the counsel appearing for the convicts submitted that in the police diary there was no mention of it.

Nirbhaya was raped by six people on the intervening night of December 16-17, 2012 in a bus in south Delhi. She was also severely assaulted before being thrown out on the road. She succumbed to injuries at Mount Elizabeth Hospital in Singapore on December 29, 2012.

The fourth death row convict in the case, Akshay Kumar Singh (31), did not file a review petition against the Supreme Court's May 5, 2017 verdict.

One of the accused in the case, Ram Singh, had allegedly committed suicide in Tihar Jail in Delhi.

A juvenile accused was convicted by a juvenile justice board. He was released from a reformation home after serving a three-year term.