The problem started with the appointment of the chief minister’s son Khriehu Liezietsu as his adviser with Cabinet status and pay. 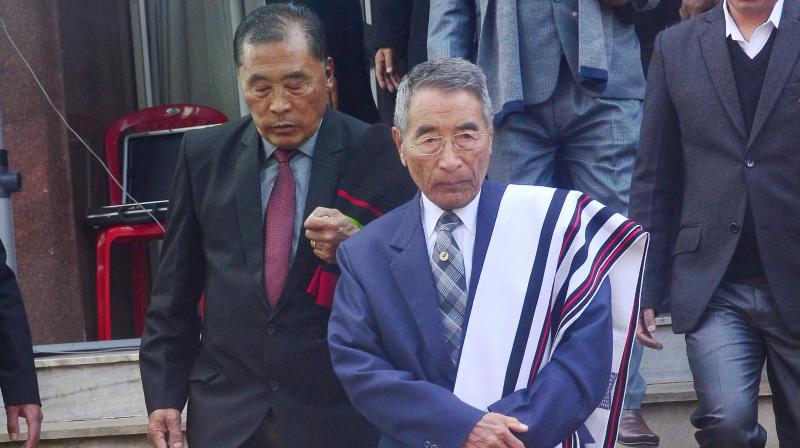 Guwahati: Former Nagaland chief minister T.R. Zeliang and senior leaders of the Nagaland People’s Front are likely to meet state governor P.B. Acharya on Monday in Guwahati. Saying Mr Acharya will be here on Monday, sources in the rebel camp told this newspaper that most of the NPF MLAs who were at a resort near the Kaziranga National Park and Kohima, were also arriving in Guwahati. Pointing out that Mr Zeliang had sought an appointment with the governor, sources said at least 41 NPF MLAs out of 47 had given their consent for the ouster of chief minister Shurhozelie Liezietsu.

Nagaland chief minister Shurhozelie Liezietsu on Sunday also sent a recommendation to Raj Bhavan for the dismissal of four ministers and 10 parliamentary secretaries, but the decision was pending as Mr Acharya was in Guwahati on Sunday.

The chief minister sought the removal of home minister Yanthungo Patton, power minister Kipili Sangtam, national highway and political affairs minister G. Kaito Aye, and forest-environment and climate change minister Imkong L. Imchen from the Cabinet. Earlier, in a letter to the governor, former chief minister T.R. Zeliang, who was forced to quit due to an agitation by civil society groups four months back, staked claim to forming the  government again. He told the governor that he had the support of 41 legislators.

“The legislators also urged the present chief minister, Shurhozelie Liezietsu, who is a non-legislator, to resign and pave the way for me (Zeliang) to take over as chief minister,” he said in his letter.

Claiming the support of 34 (including himself) out of the 47 NPF legislators, he informed the governor that seven Independents had also affirmed their support to him. In the letter, Mr Zeliang said the legislators wanted him to continue as leader of the NPF legislature party and also authorised him to stake claim to form a new NPF-led Democratic Alliance of Nagaland government. He said a meeting of the NPF legislature party was held on July 4 at his residence.

Meanwhile, chief minister Shurhozelie Liezietsu in an official notification terminated the appointment of Mr Zeliang as adviser (finance) to the state government. Mr Zeliang said, however, that he had already resigned from that post.

The problem started with the appointment of the chief minister’s son Khriehu Liezietsu as his adviser with Cabinet status and pay. The legislators accused the chief minister of indulging in nepotism. Mr Khriehu had quit his Northern Angami-I Assembly seat last month to enable his father to contest and become an Assembly member in order to continue as chief minister.

Mr Liezietsu, who is also the NPF president, was sworn in as chief minister on February 22 this year after Mr Zeliang resigned after violent protests by tribal groups who were opposed to his move to hold civic polls with 33 per cent reservations for women.