On May 17, the Centre had asked Uttar Pradesh and Bihar to prevent the dumping of dead bodies in the Ganga and its tributaries 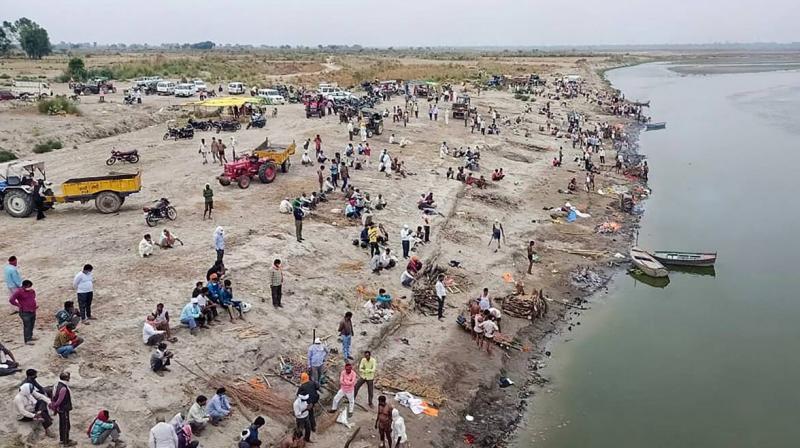 Relatives and family wait to cremate on the banks of River Ganga, in Unnao, Thursday. (Photo: PTI)

Patna: Days after bodies were found floating in Ganga in the state, samples collected from the river have been sent for testing to check for COVID-19 contamination in the water, informed Bihar State Pollution Control Board Scientist, Navin Kumar.

"The sampling of Ganga river is a routine thing which we carry out on a regular basis. The pollution board keeps on investigating the quality of water of the Ganga river. But as you know that there were reports of bodies of COVID-19 victims disposed of in the river, so, we are conducting tests to check whether the river has been contaminated with coronavirus or not," Kumar told ANI.

He mentioned that the initiative of conducting such an investigation of the river water was taken through the National Mission for Ganga under the Jal Shakti Ministry, in collaboration with the Indian Institute for Toxicological Research (IITR), Lucknow, which is a laboratory of the Council of Scientific and Industrial Research (CSIR), state pollution control board, and the district administration.

Kumar said that the team collected samples from river Ganga on June 1 in Buxar and on June 5 in Patna, Bhojpur and Saran, adding that the samples have been sent to Lucknow for testing the reports of which are awaited.

"A Central team of scientists arrived here from Lucknow to inspect and collect samples. The team collected samples from river Ganga on June 1 in Buxar and on June 5 in Patna, Bhojpur and Saran to check whether bodies reportedly seen in and around the river contaminated river water. Samples have bee sent to Lucknow and the report is awaited," added Kumar.

On May 17, the Centre has asked Uttar Pradesh and Bihar to prevent the dumping of dead bodies in the Ganga and its tributaries, calling media reports of bodies of COVID-19 victims being dumped in the rivers "undesirable and alarming".

The Jal Shakti Ministry had said that the state governments should focus on their safe disposal and dignified cremation.

On May 13, the National Human Rights Commission (NHRC) had issued notices to the Union Jal Shakti Ministry, Uttar Pradesh, and Bihar, after receiving complaints about dead bodies floating in the Ganga.

Namami Gange had directed states to prevent dumping of dead bodies in the Ganga "and focus on their safe disposal and providing support for ensuring dignified cremation," the Jal Shakti Ministry had said at a review meeting conducted on May 15-16.

The state pollution control boards were also directed to monitor the water quality more frequently in consultations with the health departments.