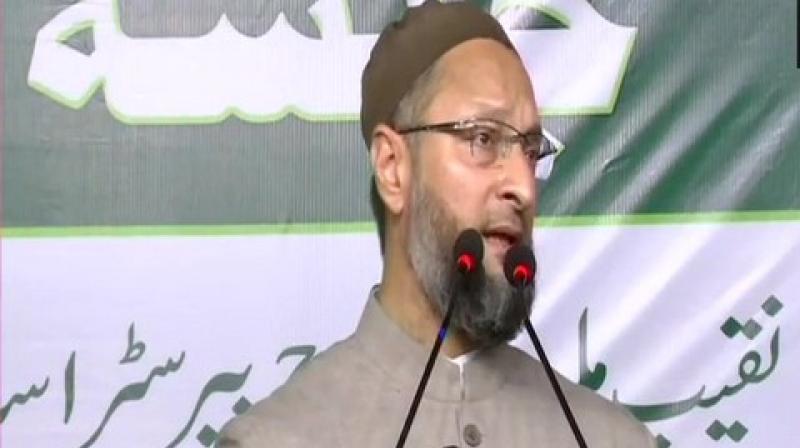 The Hyderabad MP said that he is still hopeful of getting Muslim's place in the country as the community does not want to survive on anyone's alms. (Photo: ANI)

Hyderabad: All India Majlis-e-Ittehadul Muslimeen (AIMIM) president Asaduddin Owaisi has claimed that Congress President Rahul Gandhi won in Wayanad due to 40 per cent population being Muslims.

The Hyderabad MP said that he is still hopeful of getting Muslim's place in the country as the community does not want to survive on anyone's alms.

"On 15 August 1947, our elders thought that this will be a new India. That India will be of Azad, Gandhi, Nehru, Ambedkar and of crores of their followers. I am still hopeful of getting our place in the country. We don't want alms, we don't want to survive on your alms," Owaisi said while addressing a public gathering here on Sunday.

"You don't want to leave Congress and other secular parties. But remember they don't have strength, thinking, they don't work hard...Where did BJP lose? In Punjab. Who's there? Sikhs. Why did BJP lose anywhere else in India? Due to regional parties there and not Congress. The Congress leader himself lost in Amethi and received victory in Wayanad. Isn't the 40 per cent population of Wayanad Muslim?" he added.

Gandhi, who netted 7,05,034 votes in Wayanad, won by 4,31,063 votes against his nearest rival PP Suneer of Left Democratic Front (LDF) in the constituency.