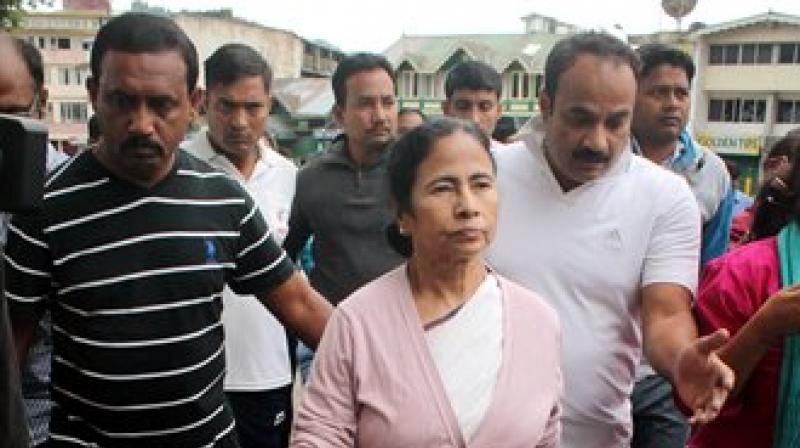 Chief minister Mamata Banerjee arrives in Darjeeling after a clash between the police and GJM supporters. (Photo: PTI)

Kolkata: Chief minister Mamata Banerjee on Friday warned of stern action against the Gorkha Janmukti Morcha (GJM) workers for Thursday’s violence in Darjeeling as the Army conducted route march adding four more columns to its strength of presence alongwith a deployment of three companies of Central Reserve Police Force (CRPF) in the Hills amidst a 12-hour strike which saw panicked tourists leaving in groups since morning during the peak season.

In the morning, Ms Banerjee, who is staying back in Darjeeling till normalcy is restored, went out for a walk and took stock of the situation at Male. Without taking the name of GJM she said, “Whoever were involved in the violence will not be spared from the law. Law will take its own course. Many international tourists are here. The police will do its duty. The Army is conducting route march. Our government was soft and provided them all kind of support.”

She elaborated, “But this time, the government will be very tough. It will not tolerate any violence. We want peace in the Hills.”

Crossing swords with her, GJM chief Bimal Gurung however declared himself as the “CM of the Hills”.

Virtually throwing a challenge to Ms Banerjee, he said, “The Bengal CM is showing her strength to us. She perhaps forgot that I am an elected representative of the Gorkhaland Teritorial Administration. I am the CM of the Hills. I warn her no trouble erupts in the Hills. I will talk to the Centre. We are in the NDA government. We will submit a report to the Centre narrating the police atrocities on the people of the Hills.”

Eastern Command spokesperson Wing Commander S.S. Birdi said, “The curfew was imposed by the district administration after the violence. Army was requisitioned at 6.15 pm on Thursday after which two Army columns were deployed initially in Darjeeling. Requisition for deployment of additional columns in Kalimpong and Kurseong as a precautionary measure, was received late in the night.”

He added, “A total of six columns have been deployed — three in Darjeeling, two in Kalimpong and one in Kurseong — each column comprising 43 personnel. Three companies of CRPF have been deployed. The Army carried out flag-marches in Kalimpong, Darjeeling and Kurseong on Friday. The Army, CRPF and the civil administration are coordinating with each other and the situation is under control of the civil administration.

The chief minister also set up a committee of three senior IPS officers — Siddh Nath Gupta, Jawed Shamim and Ajay Nand — who have previous experience of working in the Hills — to monitor the law and order situation in Darjeeling. The trio reached the hills and attended a meeting convened by Ms Banerjee in the afternoon.