A time when India, Pak set aside hostility

Fest brings devotees from both sides of border on 4th Thursday of June every year. 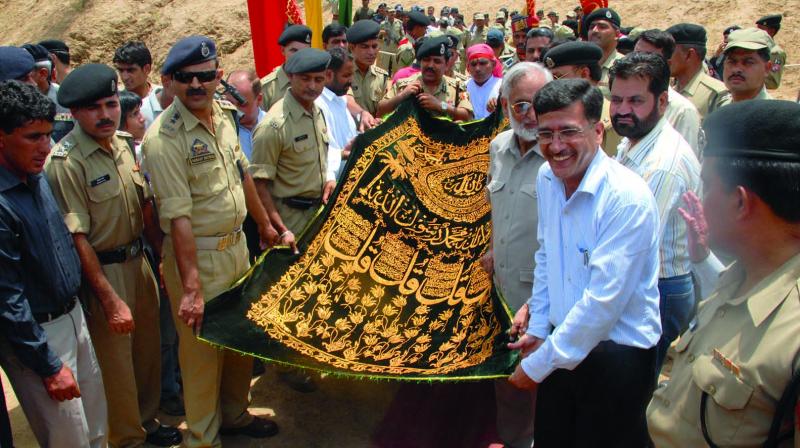 A chadder sent by Pakistani Rangers being placed at the mausoleum of Baba Chamliyal.

Srinagar: In spite of persisting tensions along the India-Pakistan borders in Jammu and Kashmir, the preparations for the annual Baba Chamliyal Mela, to be held on the divide line later this month, are in full swing.

The mela brings thousands of devotees of Baba Chamliyal from both sides of the International Border (IB) which is called “Working Boundary” by Islamabad together on the fourth Thursday of June every year. As before, they would be joined by the officers and jawans of the Border Security Force (BSF) and their counterparts from Pakistan Rangers (PR).

They converge at the mausoleum of Baba Chamliyal, exchange pleasantries and together pray for peace in the region. The fair in the memory of Dileep Singh Manhas, alias Baba Chamliyal, a revered figure on both sides of the border who lived about 320 years ago, is held in Chamliyal village which falls in the Ramgarh sector of Jammu and Kashmir and is about 42 km from winter capital Jammu. Incidentally, this sector has witnessed some of the worst incidents of ceasefire violations and cross-border skirmishes in the recent weeks.

During the fair, the BSF tr-oopers, as per tradition, car-ry shakkar (clay) and sharbhat (beverage) for thousands of men and women devotees from Pakistan who gather just across the IB in Saidanwali hamlet. The Pakistani Rangers in turn give a chaddar (coverlet) to the BSF officials for placing it on Baba Chamliyal’s tomb.

Prior to the 1971 war, civilians from across the border would also join the fair. Also, the tradition suffered a major setback when in 1989-90 the Kashmiri separatist campaign turned into a major violence and subsequently both the IB and the Line of Control (LoC) became war theatre with exchange of fire becoming a daily affair.

While at the Chamliyal’s tomb, the mela is of one day, the celebrations continue for one week at Saidanwali. The devotees from both sides, including Hindus, Muslims and Sikhs, visit his tomb or its replica for “effective treatment to chronic skin diseases” by applying clay and water collected from the original one. The 300-year-old mela is seen as a symbol of the shared past of the two countries.

The mela is seen as a symbol of the shared past of the two countries. The legend goes that some criminals beheaded Baba Chamliyal and dropped his corpse at Saidanwali, now in Pakistan, approximately 400 meters from where his tomb stands in Chamliyal village today. Baba’s head was left at Chamliyal; hence, both the places gained religious importance over the years.

Subsequently one of the Baba’s disciplines suffering from incurable skin disease remembered him. The mystic appeared in his dream and asked him to apply shakkar as well as sharbat from his shrine complex on his body. The disciple followed the instructions and within next few days he was completely cured. Since then, the shrine gained enormous faith of people of various religions.

Last year, more than 1,50,000 devotees from across Jammu region and neighbouring Punjab, Haryana, Himachal Pradesh and beyond turned up at the mystic’s mausoleum to pay obeisance despite the scorching heat. On the other side of the border, thousands of people converged at Saidanwali to pray at a replica of the Baba Chamliyal’s tomb built after restrictions were imposed on the Pakistani devotees visit.

Earlier this week, field commanders of the BSF and PR met during a flag meeting to discuss the modalities of the fair. BSF’s Happy Verma and PR’s Muhammad Irfan represented the two sides which agreed to ensure “complete peace” along the border during the fair.

The J&K government is also getting ready for the mela. On June 8, minister for industries and commerce Chander Prakash Ganga kickstarted blacktopping work on 7 km Abtal to Baba Chamliyal road ahead of the annual fair. “The work involving a cost of `2.80 crore has been taken up to provide smooth access to the devotees during the mela,” Mr Ganga said. The government is also laying tiles in the shrine premises at a cost of `2 lakh.

In fact, come fourth Thursday of June, Indians and Pakistanis put behind all bitterness and antipathy the Partition begot for the sub-continent.