India   All India  10 May 2022  Those who tried to spoil Punjab's atmosphere will get strictest punishment: CM Mann
India, All India

Those who tried to spoil Punjab's atmosphere will get strictest punishment: CM Mann

The incident is being seen as a major intelligence failure as the office houses the state counter intelligence wing, special task force 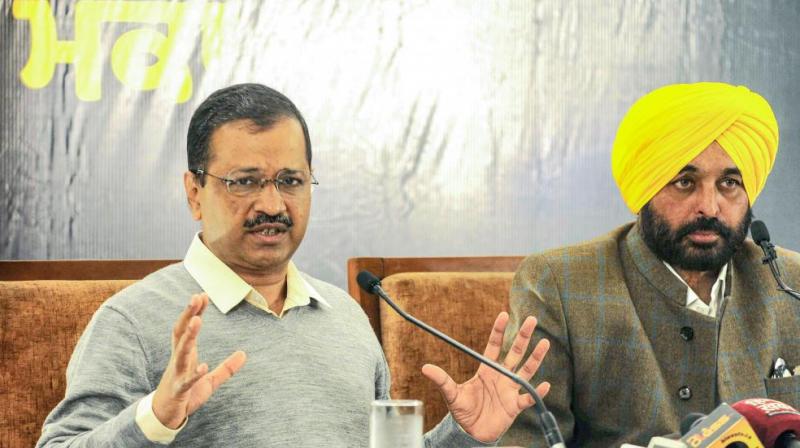 Chandigarh: Punjab Chief Minister Bhagwant Mann on Tuesday said strictest punishment will be given to those who tried to spoil the atmosphere in the state by attacking the Intelligence Wing headquarters of Punjab Police in Mohali and highlighted that some arrests have been made in the case.

Mann also held a meeting with Punjab Director General of Police V K Bhawra and top officials of the Intelligence Wing here and sought a report on the incident.

Mann's statement comes a day after a rocket-propelled grenade was fired at the third floor of the highly-guarded building in sector 77 on Monday night, following which an alert was sounded.

The incident is being seen as a major intelligence failure as the office houses the state counter intelligence wing, special task force and some other units.

No one, however, was injured in the explosion, which political parties termed "disturbing" and "shocking".

After the meeting on Tuesday, Mann said, I held a meeting with the DGP and officers of the Intelligence in the wake of the incident that happened in Mohali yesterday. All the details are coming out. Some arrests have been made and more will be made.

I want to say that whosoever tries to spoil the atmosphere of Punjab will not be spared and they will get strictest punishment which their coming generations will remember, he added.

Mann further said that the matter was being probed and things will become clearer by evening.

Very soon, the culprits will be behind bars, said Mann.

Earlier, Mann in a tweet had said that the Punjab Police is investigating the explosion in Mohali.

Anybody who tries to spoil the atmosphere in Punjab will not be spared, said Mann in a tweet in Punjabi.

The incident took place days after the arrest of four suspected Pakistan linked terrorists in Haryana's Karnal and the arrest of two people with recovery of an Improvised Explosive Device (IED) packed with 1.50 kg RDX from Tarn Taran district in Punjab.

The explosion also came close on the heels of the recovery of an explosive device near Burail Jail in Chandigarh on April 24.

Meanwhile, Aam Aadmi Party (AAP) MP Raghav Chadha dubbed the incident as an act of cowardice and said strongest possible action will be taken against those who were behind it.

Explosion in Mohali is an act of cowardice by those powers who want to disrupt the hard-earned peace of the state. Punjab government will not spare those involved and strongest possible action will be taken, tweeted Chadha, who is a Rajya Sabha MP from Punjab.

Another AAP MP Sandeep Pathak said the attack was despicable.

Attack at Punjab Police Intelligence Headquarters in Mohali is despicable. I strongly condemn this vicious attack. The incident is being investigated by police, and not a single culprit should be spared," said Pathak in a tweet.

Meanwhile, the opposition parties targeted the AAP government in the state over the explosion and asked Mann to focus on the deteriorating law and order situation.

Congress MLA and leader of opposition in the state assembly Partap Singh Bajwa said the attack was worrying and poses a threat to the hard-earned peace in the state.

RPG attack on Punjab Police intelligence wing office in Mohali is worrying. This after RDX was found few days back in Tarn Taran. Punjab has been through dark times already, we can't afford to damage the hard-earned peace of Punjab, said Bajwa in a tweet.

Congress MLA Sukhpal Singh Khaira condemned the Mohali blast incident and demanded action against those behind it.

Mohali blast is condemnable and those responsible should be punished. But it must be ensured that innocents are not harassed. There have been instances in past where innocent Sikh youths were falsely implicated to cover failures of the police and intelligence and also to deflect public wrath, he said in a tweet.

Punjab BJP chief Ashwani Sharma said the blast at the building of the intelligence headquarters is a matter of concern and also expressed surprise over the local police describing it as a minor explosion.

The Mohali police had on Monday said that a minor explosion was reported at the headquarters.

The chief minister needs to pay attention to the deteriorating law and order situation in Punjab, said Sharma in a tweet.

Spokesperson of the ruling AAP, Malvinder Singh Kang, said the perpetrators of the crime will not be spared.

Blast in Mohali is unfortunate however the situation is under control, matter is being investigated, the perpetrators of the crime will not be spared, nobody will be allowed to fiddle with hard earned peace and harmony. An uneasiness of anti-Punjab forces is understandable, said Kang in a tweet.

New Delhi: AAP national convener Arvind Kejriwal termed the explosion in Mohali "a cowardly act" of those who want to disturb peace in Punjab and asserted that his party's government in the state will ensure the culprits get the "strictest punishment".

"Mohali blast is a cowardly act of those who want to disturb the peace of Punjab. The Aam Aadmi Party's (AAP) government in Punjab will not let wishes of those people be fulfilled," Kejriwal said in a tweet in Hindi.

"Peace will be maintained under all circumstances with the cooperation of all the people of Punjab and the culprits will be given the strictest punishment,'' the AAP leader, who is also the chief minister of Delhi, said.

Senior AAP leader and Rajya Sabha MP Sanjay Singh said that "anarchic elements" have become active in Punjab to disturb its peace ever since the Arvind Kejriwal-led party formed its government in the state.

"Ever since the government of @AamAadmiParty was formed in Punjab, the anarchic elements, who disturb peace, have become active," he said in a tweet in Hindi.

"Those who spread hatred and violence in Punjab will be behind bars," he added.

Co-in charge of the AAP's political affairs and newly elected Rajya Sabha MP Sandeep Pathak condemned the rocket-propelled grenade attack in Mohali, calling it "vicious and despicable". Not a single culprit should be spared, he said.

"Attack at Punjab Police intelligence headquarters in Mohali is despicable. I strongly condemn this vicious attack. The incident is being investigated by the police, and not a single culprit should be spared," Pathak tweeted.

AAP Rajya Sabha MP Raghav Chadha said the grenade attack was an act of cowardice by those powers who want to disrupt the "hard-earned peace" in the state.

"Explosion in Mohali is an act of cowardice by those powers who want to disrupt the hard-earned peace of the state. Punjab government will not spare those involved and strongest possible action will be taken," Chadha tweeted.