Massive protests erupted there as hundreds of people, including many women, started a dharna as soon as SDMC officials reached the spot 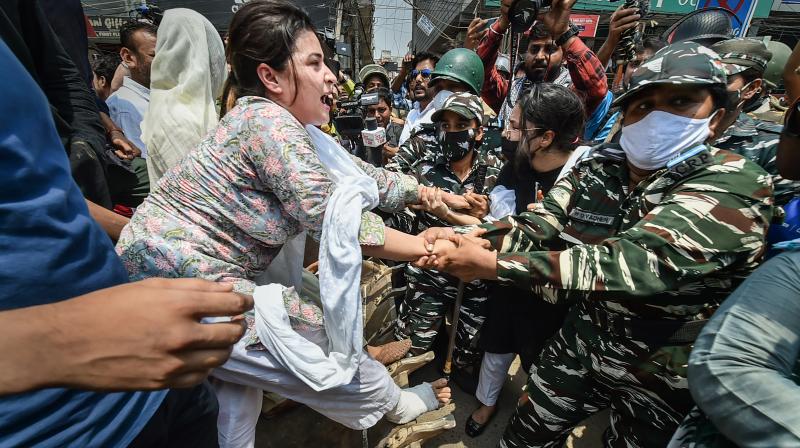 : Security personnel attempt to stop locals staging a protest in front of a Municipal Corporation of Delhi (MCD) bulldozer at Shaheen Bagh area, during an anti-encroachment drive, in New Delhi, Monday, May 9, 2022. (PTI Photo/Arun Sharma)

New Delhi: The anti-encroachment drive at South Delhi’s Shaheen Bagh was halted on Monday morning, just hours after civic body officials had arrived at the spot along with the Delhi police. Massive protests erupted there as hundreds of people, including many women, started a dharna as soon as officials of the South Delhi Municipal Corporation (SDMC) reached the spot with bulldozers to carry out the exercise. The protesters raised slogans against the BJP-ruled SDMC as well as the Central government and demanded that the drive be stopped immediately. Aam Aadmi Party MLA Amanatullah Khan joined local residents in their protest against the SDMC move. The drive came to a halt as the bulldozers left the area.

DCP (Southeast) Esha Pandey said an FIR had been filed on the SDMC’s complaint against Amanatullah Khan and his supporters under Sections 186/353/34 of the Indian Penal Code.

As soon as the bulldozers rolled into the locality, teeming with police and paramilitary personnel, to pull down alleged illegal structures, hundreds of people gathered on the streets and atop buildings in the area. Many raised slogans against the authorities and staged sit-ins on the road, and a woman protester hopped on to a bulldozer, the earthmoving machine that has emerged as a symbol of government power in recent months.

The SDMC lodged a complaint against AAP’s Okhla MLA Amanatullah Khan and his supporters at Shaheen Bagh police station for obstructing the demolition drive and preventing public servants from discharging their duty.

After the SDMC officials reached Shaheen Bagh with bulldozers, some locals started removing “illegal structures” on their own, an official said.

The Supreme Court, meanwhile, on Monday refused to entertain a plea by the CPI(M) against the Shaheen Bagh demolition drive, saying it can’t interfere with an anti-encroachment drive on the urging of a political party. A bench of Justices L. Nageswara Rao and B.R. Gavai asked the petitioners to approach the Delhi high court.

“Why is the CPI(M) filing a petition? What is the fundamental right that is being violated? Not at the behest of political parties. This is not the platform. You go to the high court,” the bench said.

SDMC central zone chairman Rajpal Singh told PTI the illegal structures in the area couldn’t be removed due to the protests. He added, however, that the civic body plans to carry out an anti-encroachment drive near Gurdwara Road at New Friends Colony on Tuesday, while a similar exercise has been chalked out for Meharchand Market in Lodhi Colony near the Sai Baba Mandir and at the Jawaharlal Nehru Stadium Metro station on May 11.

Earlier in the day, leaders of the AAP, including Amanatullah Khan, and the Congress reached the spot and staged a dharna. Mr Khan alleged on Twitter that the municipality planned the drive to “spoil” Shaheen Bagh’s environment. “A few days back, I visited Okhla Assembly constituency and removed encroachments where I saw them. The MCD reached there (Shaheen Bagh) to spoil the environment in the name of encroachment, but it did not get anything. The MCD is requested to inform us and we will remove the encroachments ourselves wherever they exist,” Mr Khan said in a tweet in Hindi.

The SDMC has defended its action, with an official saying the drive was planned after a thorough inspection. “It is our duty to remove encroachments wherever it is seen. We were only discharging our duty. We will continue our action against encroachment tomorrow and the day after as per our action plan,” the official said.

Last month, the North Delhi Municipal Corporation (NDMC) carried out an anti-encroachment drive in Jahangirpuri, which saw violent Hindu-Muslim clashes on April 16. The action drew widespread criticism and the Supreme Court had to intervene to stop the drive.

Mr Rajpal Singh said removing encroachments was the function of any municipality. He claimed the protests were “politically motivated”. The

locals alleged that the SDMC’s drive had instilled fear among them.

Congress leaders, including Parvez Alam, media cell vice-chairman of the party’s Delhi unit, were among those detained by the police.

Later in the day, Delhi BJP chief Adesh Gupta wrote to SDMC mayor Mukesh Suryan and Delhi police commissioner Raskesh Asthana, asking them to register an FIR against the AAP and Congress leaders who had obstructed the anti-encroachment drive. He criticised the Congress and AAP for opposing the drive. “When terrorists explode bombs in Delhi, they don’t see the religion of their targets, all become their victims. It is therefore important that both the Congress and AAP shouldn’t link this whole thing to a religion. One who is a militant and not from our country has no right to anything in Delhi,” Mr Gupta asserted.

The plan for the anti-encroachment drive came after Mr Gupta wrote to the mayors of the South and East corporations on April 20 seeking the removal of encroachments “by Rohingyas, Bangladeshis and anti-social elements” in their areas.

In December 2019, Shaheen Bagh was the epicentre of protests against the Citizenship Amendment Act (CAA). The sit-in, which was largely led by women, was called off in March 2020, when the Covid-19 pandemic struck the city.