India   All India  10 May 2020  Congress demands setting up of multimodal agency to resolve migrant crisis
India, All India 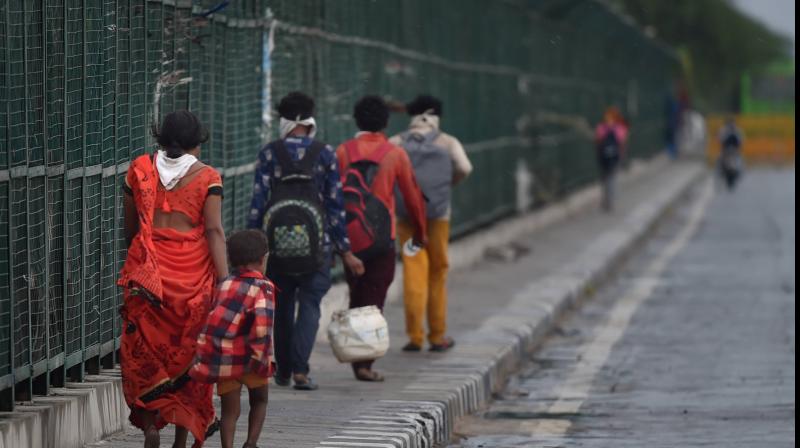 Migrants with their belongings walk along ISBT and Seelampur road to reach their native places, during the nationwide lockdown imposed to contain the coronavirus pandemic, in New Delhi. PTI Photo

New Delhi: The Congress on Saturday demanded an immediate setting up of a multimodal agency under a senior cabinet minister to ensure that the migrant labor crisis is sorted. Taking to twitter senior Congress leader and Treasurer Mr. Ahmed Patel lashed out at the Railways Ministry and added, “I request the government to constitute a multimodal agency under a senior Cabinet Minister to oversee relief and rescue of migrants. If need be even support of Armed Forces must be sought to solve this humanitarian crisis. Clearly the Railway Ministry is unable to handle the problem.” The Congress leader's comments come a day after the Aurangabad train accident which claimed the lives of 16 migrant workers.

Earlier Mr. Patel on the instructions of Congress President Mrs. Sonia Gandhi had instructed state units of the party to ensure that train fares of migrant laborers who were travelling back to their native places was paid by the party. Meanwhile senior Mr. P Chidambaram blamed the central government for the incident on the railway tracks he said, “Now, governments are shedding crocodile tears for the migrant workers who were killed by a train. The tragedy on our highways and railway tracks is visible every day to all, except the governments.” He further added, “Congress was the first to draw attention to the fact that, despite trains and buses, thousands of migrant workers are trekking back home. No one paid heed to our warning.”

Interestingly it was the Congress almost 38 days back that demanded that migrant labourers who wanted to go home should be allowed. The Congress charged that the transport policy of providing buses and trains to transport migrant workers was poorly designed, planned, coordinated and implemented. The party also asserted that once the policy was announced, the government should have gone to the rescue of the trekkers and provided buses or trains to them to continue their journey. As the economic activity came to halt due to the lockdown the Congress has been demanding that the center announces a financial assistance package.  Also, an immediate cash transfer to people who are beneficiaries