Wives of 2 Bihar dons locked in a fierce battle

Sources claim that Kavita Singh is banking on BJP and JD(U)’s core–Rajputs and OBCs voters. 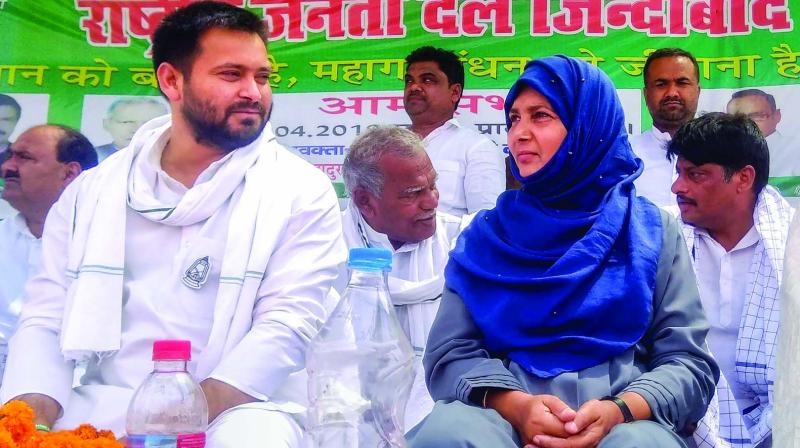 Patna: After a tough contest in five phases, it appears that NDA and grand alliance are locked in a neck to neck contest in the sixth phase in Bihar.

Siwan has become a hot seat for both NDA and grand alliance as wives of two dreaded gangsters turned politician — Hina Shahab and Kavita Singh are locked in a fierce battle.

Hina Shahab, who has been fielded by RJD, is the wife of four-time MP and criminal turned politician Mohammad Shahabuddin, while the JD(U) has given the ticket to Kavita Singh, a sitting MLA, and wife of another dreaded gangster Ajay Singh who too enjoys political influence in the entire constituency. Shahabuddin is currently lodged in Tihar jail.

After Shahabuddin was convicted and barred from contesting elections in 2007 RJD chief Lalu Yadav chose Hina Shahab but she lost to Om Prakash Yadav of the BJP in 2009 and 2014.

This time the seat went to chief minister Nitish Kumar’s party JD(U) under the seat-sharing arrangement in the NDA.

Sources claim that Kavita Singh is banking on BJP and JD(U)’s core–Rajputs and OBCs voters. However, political analysts don’t rule out the possibility of division in the OBC votes.

In the last two Lok Sabha elections (2009 and 2014) sharp division in votes had helped the NDA win. However, in this election, the caste equations have changed after RLSP Chief Upendra Kushwaha, Mahadalit leader and HAM Chief Jitan Ram Manjhi and Vikasheel Insan Party (VIP) of Mukesh Sahani who is also known as the son of Mallah joined RJD led grand alliance.

According to political analysts, if the RJD’s traditional Muslim and Yadavs voter base gains support from the Kushwahas, EBCs and Dalits, it can create trouble for the JD(U) candidate Kavita Singh.

However, political analysts claimed that the voters, unlike previous two Lok Sabha elections, have been silent this time as they have to choose between wives of two Bahubalis (dons) who are contesting against each other. They also pointed out that the CPI-ML nominee Amarnath Yadav is also in the race, making Siwan a triangular contest.

“I don’t see any challenge. I have left everything to the people who know how much my husband did for Siwan”, RJD nominee and Mohammad Shahabuddin’s wife Hina Shahab said.