India   All India  10 May 2017  Saharanpur on edge again after fresh violence
India, Crime 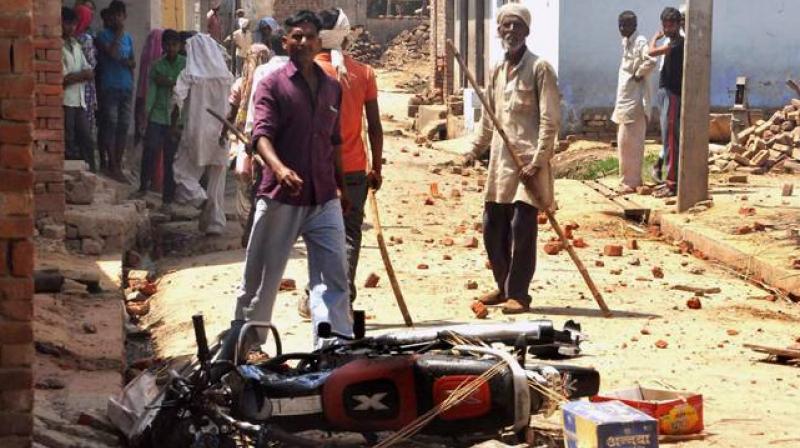 The protesters pelted stones at the officials and police vehicles and a roadways bus was also set on fire. (Representational image)

Lucknow: For the third time in the past 20 days, violence erupted between dalit and Thakur community again in Saharanpur on Tuesday, putting the state police on high alert. Clashes began between the two communities after some people tried to stall a procession on the occasion of Maharana Pratap Jayanti.

A dalit group, called Bhim Sema, refused to allow a procession, saying that they were not allowed to take out a similar event on Ambedkar Jayanti.

SP city had to seek cover to save himself from the wrath of the mob. Two police officials have reportedly suffered head injuries.

The protesters pelted stones at the officials and police vehicles and a roadways bus was also set on fire. Some vehicles belonging to mediapersons were also targeted.

Additional forces have been rushed in from adjoining districts.

The fresh bout of violence comes two days after DGP Sulkhan Singh and other senior officials had visited Saharanpur to take stock of the situation.

It may be recalled that on April 20, a communal clash had taken place in the district when some people attempted to take out a Ambedkar shobha yatra. The mob had vandalised the office and residence of SSP Love Kumar who was later transferred. BJP MP Raghav Lakhanpal was said to be leading the mob.

On May 5, violence erupted again when a group was celebrating the anniversary of Maharana Pratap and the local dalits objected to this. The clashes left one person dead and two dozen injured. Seventeen persons were later arrested in connection with the violence.

The same group, on Tuesday, tried to prevent another procession on Maharana Pratap and resorted to violence.