India   All India  10 May 2017  From scrap to sculptures: Madurai sees new art
India, All India

The viewer can feel the artistic touch in each of the works of art made of metallic parts that once played a part in running an automobile. 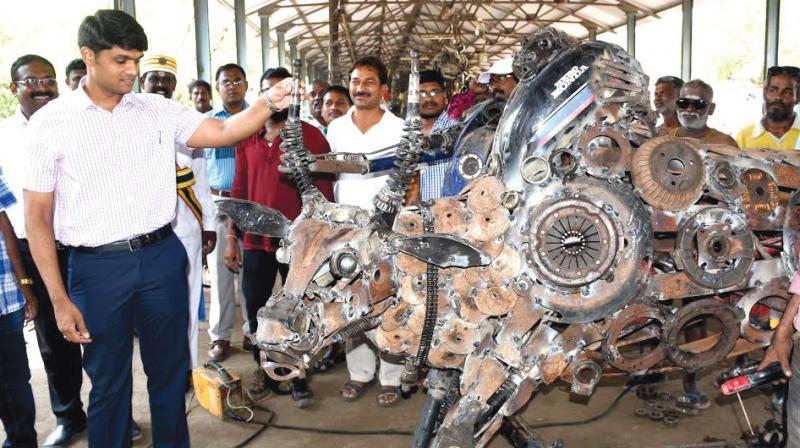 Madurai corporation commissioner Sandeep Nanduri examines the jallikattu bull and a tamer statue that have been fabricated from steel and metallic scrap lying in corporation’s dumpyard. (Photo: K. Manikandan)

Madurai: Giving life to waste, the Madurai city corporation launched a creative project under which 15 statues have been fabricated from steel and metallic scrap lying in the corporation dumping yard.

A 12-foot tall statue of Mahatma Gandhi and an eight-foot tall jallikattu bull and tamer are among the collection of creative works to be erected at the Automobile Sculpture Park to be set up soon in the city. The viewer can feel the artistic touch in each of the works of art made of metallic parts that once played a part in running an automobile. For instance, among the metallic scrap items seen on the statue of a horse are chain sprockets, circular gears, mudguards and steal sparrow.

The city corporation commissioner Sandeep Nanduri brought a 15-member team comprising sculptors and college professors from Andhra Pradesh to work on this project for the last five days in the corporation scrap yard in Sellur. “The team has used 16 kgs of metallic scrap, mostly spare parts of corporation vehicles, dumped in this yard, to shape the sculptures. Each sculpture will weigh a tonne,” said the commissioner. The team headed by P. Srinivasa Rao, sculptor-cum-professor of Acharya Nagarjuna University has been involved in setting up similar parks in Vijayawada, Guntur and Tirupati.