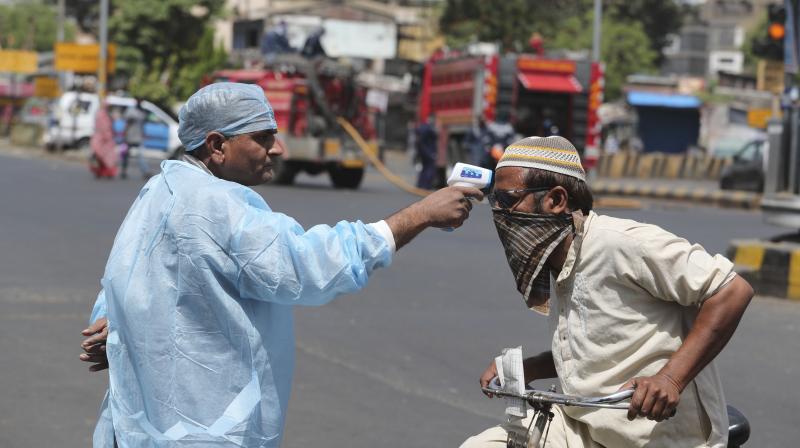 Chennai: In a surging numbers worry scenario in tackling the Covid-19 new coronavirus crisis in Tamil Nadu, the total number of positive cases zoomed to 834 by Thursday evening; but there were no new deaths during the last 24 hours and the state toll for the virus remains at eight.

Of the new 96 cases testing positive today, as many as 84 are from a "single source" who travelled together or their contacts (read returnees from the Tablighi Jamaat meet in New Delhi to the State). Of the remaining 12 samples testing positive today, three have history of inter-state travel, eight are contacts of those who travelled and one a private doctor, State Health Secretary Dr Beela Rajesh told reporters here late this evening.

In replying to critics why Tamil Nadu "is not testing more and fast", Dr Beela Rajesh said the way forward, in the backdrop of this emerging macro-scene was the arrival of the 'Rapid Test Kits (RTK), all imported from China. It may be recalled that four lakh RTKs' are arriving in Tamil Nadu.

Though imported from China, where it all began, Dr Beela Rajesh to a question assured that all these RTK kits have been "approved by an expert committee and the ICMR (Indian Council of Medical Research)."

Stating that the imported RTKs' were "specific to Covid-19", she said this test will help us to understand the prevalence (of the disease) in the community in any particular area in just 30 minutes. By testing more people and fast, "we will be actually able to assess how many people have been affected by the infection," the health secretary said and reiterated that "only approved kits are being imported."

While the RTK is an antibody test, by showing the "antibody for Covid-19" virus, Dr Beela Rajesh said it is the 'PCR test' which is eventually the confirmatory test for the RNA of the new coronavirus. So, even after the "antibody test" is done with help of RTKs', there might still be a need to do the confirmatory 'PCR Test', said the health official. Tamil Nadu has also ordered for purchase of 1.30 lakh 'PCR Test' kits.

Dr Beela Rajesh said the number of persons under home quarantine as on date were 59,918, while 213 others were in government quarantine. As many as 32,896 others in quarantine have completed their 28-day follow-up. The total blood samples tested so far across the state has been 7,267.

The 'Containment Plan (CP)' continued to be aggressively implemented across 34 districts in the State, she said. Over 32,800 field medical staff have so far surveyed 16,61,487 households and screened a population of 58,77,348 for coronavirus symptoms. The Interactive voice response scheme launched today evoked 449 calls from members of the public.