The RTKs' will also enable affected people to begin their course of treatment sooner rather than later, Mr. Palaniswami said 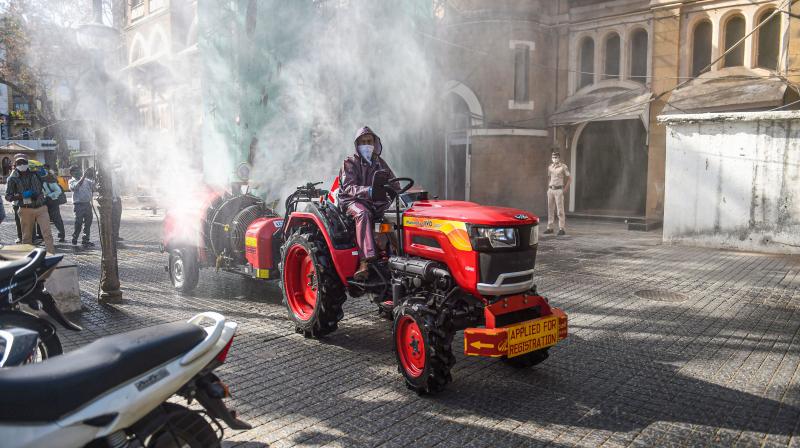 A worker sprays disinfectant as a preventive measure against coronavirus outbreak.PTI Photo

Chennai: Tamil Nadu hopes to quadruple its tests in much shorter time to diagnose the prevalence of Covid-19 new corornavirus among the population with arrival of 50,000 of the four lakh 'Rapid Test Kits (RTK)' by Thursday night, Chief Minister, Edappadi K Palaniswami said here.

The RTKs' will also enable affected people to begin their course of treatment sooner rather than later, Mr. Palaniswami said after a detailed review meeting with the members of the special task force and various committees appointed to monitor the Covid-19 control measures.

The Centre has assured to give 20,000 more RTKs' and the State government has also given orders for procurement of 1.30 lakh 'PCR' test kits, he said. The PCR (Polymerase chain reaction) kits is a vital tool in modern molecular biology that has transformed diagnostic medicine. It helps to make millions of copies of a target piece of DNA in virus testing.

Mr. Palaniswami elaborated that once a positive case of Coronavirus was detected, then the RTKs' will be used to test their relatives, their contacts and all those in the neighbourhood with a contact history with the positive patient. "We are going to distribute four lakh RTKs' to quickly diagnose a large number of people in any particular area for quick remedial action, he said, and urged the cooperation of all the people in using the RTKs'.

Explaining in detail the status of the disease prevalence in the State, the multi-pronged efforts to contain the virus, Mr. Palaniswami assured that there were enough number of N-95 masks, personal protection equipment (PPE) kits for frontline medical workers and enough number of ventilators at various hospitals. The State, in addition, has identified close to 97,000 beds in all government and private hospitals put together to ensure that "not a single life was lost" for want of health infrastructure.

To a question, Mr. Palaniswami said though "there is a chance" for Tamil Nadu slipping into stage-III of the disease (community transmission) from the present stage-II, all efforts were towards averting such a situation. He again reiterated the people's cooperation to implement and carry forward the State's preventive and control measures, to help protect themselves.

On 'confusion' prevailing over the holding of the State Board X (Matriculation) exam, Mr. Palaniswami said the government was seized of the matter and will take an appropriate decision as it is an "important public exam that qualifies students to move from one level of schooling to another." Up to class nine, in such emergency situations, students have been automatically promoted to the next class, but the X Board Exam falls under a different category, he reminded.

Extending the cash dole of Rs.1,000 to more unorganised sector workers, Mr. Palaniswami said government took a decision today to include all those registered with various welfare boards including the Third Gender, fishermen and denotified communities including gypsies. An additional seven lakh people will be covered under these categories, besides 1,20,200 workers of registered fire crackers-making units.

Among the other economic and social relief measures in the wake of Covid-19, Mr. Palaniswami said old age pension (OAP) was being reached at the doorsteps of 13,66,579 pensioners above the age of 80 in the state. He also announced a solatium of Rs. ten lakh to the family of Arun Gandhi, a police constable who died in the city of cardiac arrest while enforcing the prohibitory orders. A member of the constable's family will also be given a government job, the Chief Minister announced.

Expressing the hope that the Centre would allot more funds for Covid-19 activities, over the Rs. 510 crore released by it, Mr. Palaniswami said a studied decision on the continuation of the lockdown or otherwise beyond April 14 will be taken on the basis of inputs by all expert panels.

Mr. Palaniswami further parried queries of raising the cash dole if the lockdown period was extended to all the vulnerable sections, saying "Government will help to the extent that funds are available." The CM's Public Relief fund for Covid-19 activities has touched Rs. 101 crore, he said.

Responding to criticisms of shortage and price rise of essential commodities due to alleged hoarding, Mr. Palaniswami said to get over this problem, the government has decided that the Cooperatives department itself will take steps to procure all essential articles and sell them to the people through its cooperative stores and retail outlets.