A student said that they feel good to learn Sanskrit and teachers teach and explain very well. 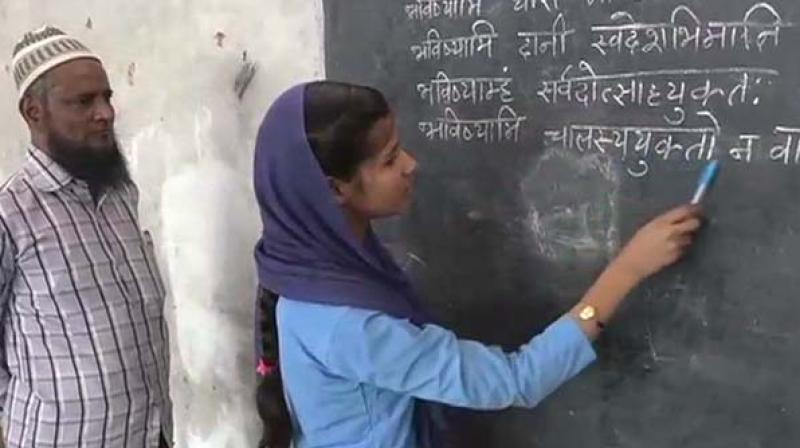 The principal of the Madrasa, Hafiz Nazre Alam, noted that being a modern establishment under the Uttar Pradesh Education Board, languages like Arabic are being taught as well. (Photo: ANI)

Gorakhpur: India is a land of linguistic diversity with each region and community having its own language and dialects, and Uttar Pradesh, which is the largest state in terms of population, is the centre of languages like Hindi, Sanskrit and Urdu. Although, languages find themselves restricted to regions, communities and sections in the state, this seems to be changing now.

An initiative has been taken up by Gorakhpur's Darul Uloom Husainia Madrasa where students are being taught Sanskrit in addition to Hindi, English and Urdu.

Students said they have enjoyed learning the subject so far, and are being taught well by their teachers and students.

"We feel good to learn Sanskrit. Our teachers teach and explain things very well. Even our parents help us in learning," a student told news agency ANI.

Meanwhile, the principal of the Madrasa, Hafiz Nazre Alam, noted that being a modern establishment under the Uttar Pradesh Education Board, languages like Arabic are being taught as well.

"Subjects like English, Hindi, Science, Maths, Urdu and Arabic are taught here. Sanskrit is now being taught to all students above Class 5. The parents of the students are also very happy and have never raised any objection to this," he added.

He also said that the curriculum at madrasas across the state is also being upgraded.

Education in Madrasas has been modernised in the recent past for the benefit of those studying there.

In October 2017, Uttar Pradesh Deputy Chief Minister Dinesh Sharma said NCERT books are being introduced in Madrasas across the state, as per suggestions made by the state Madrasa Board.

Currently, there are about 19,000 recognised and 560 aided madrasas operating in the state.

Tags: up education, uttar pradesh education board, sanskrit in madrasa