India   All India  10 Apr 2018  They are from low class, trying to malign me: UP BJP MLA on rape allegation
India, All India

They are from low class, trying to malign me: UP BJP MLA on rape allegation

Four accused -- Sonu, Baua, Vinit and Shailu -- named in the FIR registered on April 4 for beating up Pappu had been arrested. 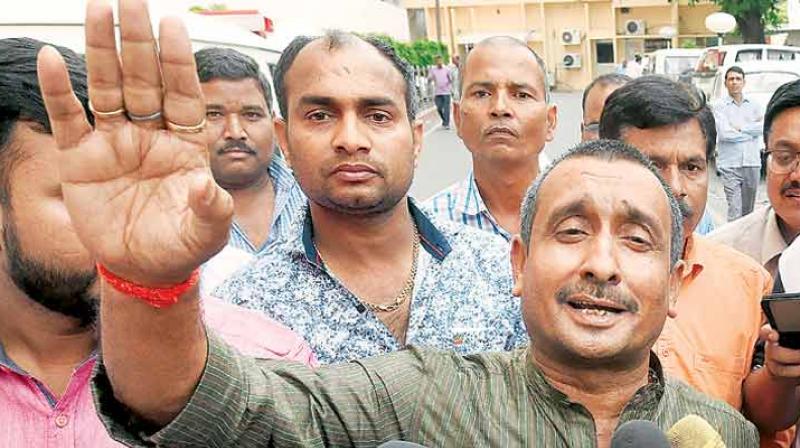 An 18-year-old woman alleged that she was raped by BJP MLA Kuldeep Singh Sengar (In photo) and his brothers. (Photo: PTI)

Lucknow: A special investigation team (SIT) has been constituted to probe the rape of an 18-year-old woman, allegedly by BJP MLA Kuldeep Singh Sengar and his brothers, in Unnao and the custodial death of the victim's father.

"The SIT will go into the entire gamut of issues involved in the incident," ADG (Law and Order) Anand Kumar told a press conference.

Earlier on Tuesday, Atul Singh, the brother of the rape-accused BJP MLA, was arrested in Unnao. The BJP MLA has rejected the charge as a conspiracy by his opponents.

The ADG also said that so far clean chit had not been given to anyone in the matter. The victim's father on Monday died in custody in Unnao, prompting her to charge that he was killed inside jail at the behest of the lawmaker.

An 18-year-old woman alleged that she was raped by BJP MLA Kuldeep Singh Sengar and his brothers.

Pappu Singh, around 50, was rushed to a hospital from the district jail on April 8 and died during treatment on Monday, Superintendent of Police, Unnao, Pushpanjali had said.

Four accused -- Sonu, Baua, Vinit and Shailu -- named in the FIR registered on April 4 for beating up Pappu had been arrested.

The complaint was lodged by Asha Singh wife of Surendra Singh alias Pappu.

Pappu was arrested on April 5 under the Arms Act after he was allegedly beaten up by Anil Singh, the MLA's brother.

Talking to reporters on Monday, BJP MLA Kuldeep Singh Sengar has rubbished any talk of his resignation.

"Just because my name is being taken, should I resign? These allegations are all totally false. The family is trying to malign me. They are from a low class. For a year, they have been running a campaign against me on Twitter, Facebook and WhatsApp," Sengar said.