CBI is probing irregularities in awarding tenders to a private company to run hotels when Lalu Yadav was the railway minister in 2006. 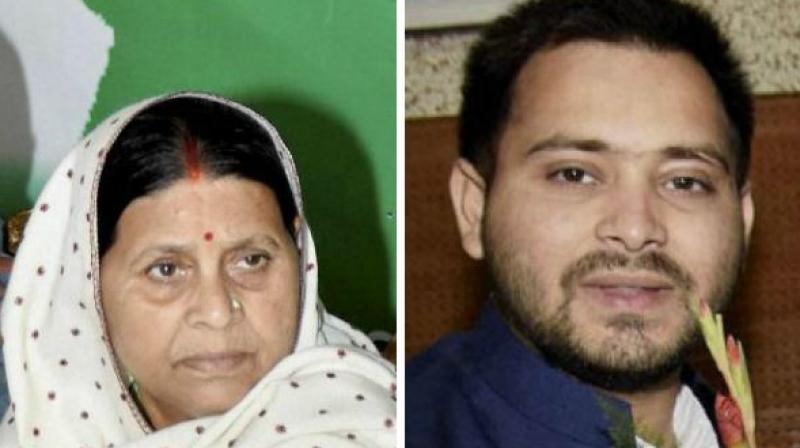 Patna: The RJD launched a fresh round of attacks on the BJP on Tuesday after CBI questioned Lalu Yadav’s wife Rabri Devi and son Tejashwi Yadav for almost four hours in connection with railway tender scam.

The opposition parties in Bihar including the Congress and Hindustani Awam Morcha (HAM) accused the ruling NDA of using the central agencies to harass the family.

According to HAM spokesperson Danish Rizwan, “This is clearly an attempt by the ruling NDA to harass the family. The action was initiated against Tejashwi Yadav because he has been raising questions about the failures of the government”.

The CBI is investigating irregularities in awarding tenders to a private company to run hotels when Lalu Yadav was the railway minister in 2006.

The CBI is also probing whether a three-acre plot worth Rs 32 crores was acquired by a private firm in lieu of the tender.

According to allegations, a large patch of land in Patna was transferred by hotelier Harsh Kocher as a favor to Lalu Yadav and family for helping him in acquiring two big hotels, one in Puri and another in Ranchi when he was the railway minister.

RJD leaders had earlier dubbed cases against Lalu Yadav and his family a part of a political conspiracy by the BJP. According to RJD Spokesperson Shakti Yadav, “raids and repeated summon notices earlier were sent to harass the family out of vendetta politics”.

He said, “The CBI has not yet been able to file a charge sheet against Tejashwi Yadav who was also made accused in the case. The party feels that the BJP wants to disturb the entire family by conducting raids and questioning Rabri Devi and Tejashwi Yadav. They have been using investigating agencies to harass us but we have people on our side”.

However, sources said that “refusal to appear before the investigating agency on several occasions by Rabri Devi earlier led to the questioning on Tuesday”.