India   All India  10 Apr 2018  First damage, saffronise, then repaint: Saga of Ambedkar's statue in UP
India, All India

First damage, saffronise, then repaint: Saga of Ambedkar's statue in UP

Several buildings in UP capital Lucknow have been painted saffron since Yogi Adityanath came to power in 2017. 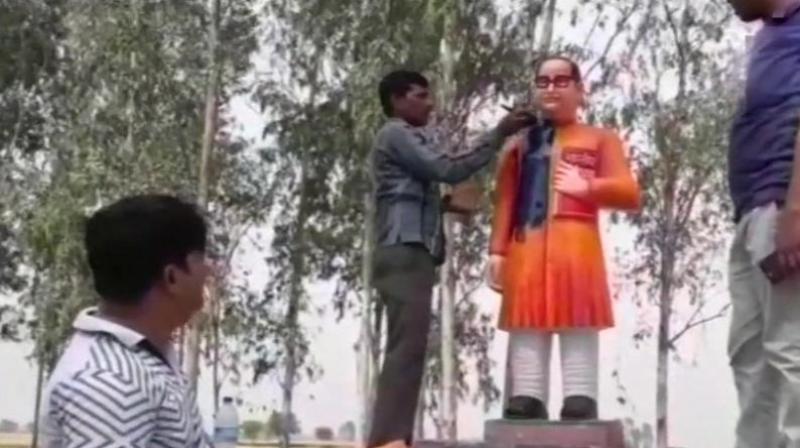 Badaun: A day after the damaged statue of BR Ambedkar - the iconic leader who drafted India's constitution - was rebuilt and painted saffron and covered in marigold garlands, it has now been repainted blue.

The statue at Badaun's Dugraiyya village was rebuilt after it was vandalised on Saturday.

Ambedkar is usually depicted in a black or blue coat in statues across the country.

The statue didn't stay saffron for long. Workers said to be from Mayawati's Bahujan Samaj Party (BSP) went to the spot and repainted it blue.

Though the statue had nothing to do with the state government, several buildings in Uttar Pradesh capital Lucknow have been painted saffron since Yogi Adityanath came to power in 2017.

Uttar Pradesh Chief Yogi Adityanath has often said, "Saffron represents purity... can someone deny the existence of the sun which is also saffron... people questioning all these are narrow-minded."

In March, a number of statues were vandalised after a Lenin statue was pulled down in Tripura after the BJP defeated the Left with a thumping majority.

Security around statues in Uttar Pradesh was increased due to Bharat Bandh called by those opposed to quota in jobs and education.