India   All India  10 Apr 2018  Not in race to be CM of Madhya Pradesh, says Digvijay Singh
India, All India

Not in race to be CM of Madhya Pradesh, says Digvijay Singh

Mr Singh had said he desired to play role of mentor in the party in the ensuing assembly elections in MP to dislodge BJP from power. 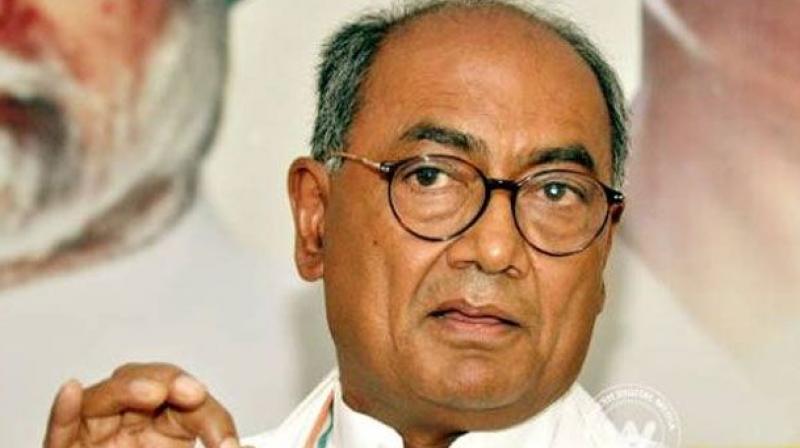 Bhopal: Veteran leader and former chief minister Digvijay Singh has offered to lead Congress in the forthcoming Assembly elections in Madhya Pradesh, due in November this year.

Talking to a section of media on the eve of closure of his six-month-long ‘Narmada Parikrama (circumambulation),  which ended at Barman Ghat in Narasinghpur district on Monday, Mr Singh had said he desired to play role of mentor in the party in the ensuing assembly elections in MP to dislodge BJP from power. Mr Singh also made it clear that he was not in the race for the post of chief minister.

“I will not accept the post of chief minister, if Congress returned to power in MP in the ensuing assembly elections, even if offered by party high command”, he added. He further said he was backing former Union minister Kamal Nath to be projected as a face of the party in the ensuing assembly elections in MP. He claimed that there were no differences in the party over declaration of chief ministerial candidate. Later, while talking to the media on the sidelines of closure of his “spiritual journey” on Monday,  Mr Singh however said Congress president Rahul Gandhi would assign the role for him for the year-end assembly elections in the state.

“I will act as a fevicol (the adhesive) to unite the party to oust BJP from power in the coming assembly elections”, he had told a section of media.

Mr Singh ended his Narmada Parikrama, began on September 30 last year, amid chanting of shlokas and hymns by the priests and a large gathering of people including leaders of Congress and BJP. He has traversed on foot 3315 km on the bank of river Narmada, along with his wife Amrita Singh. Among the political leaders who hailed him for his feat at Barman Ghat included Mr Kamal Nath, Mr Suresh Pachouri, Kantilal Bhuria, Arun Yadav and Vivek Tankh (all Congress) and BJP MP Prallhad Patel, state minister Jalam Singh Patel and BJP MLA Sanjay Sharma.