Intelligence sources said that 400 sq km area around the venue of the PM’s scheduled programme, is being sanitised. 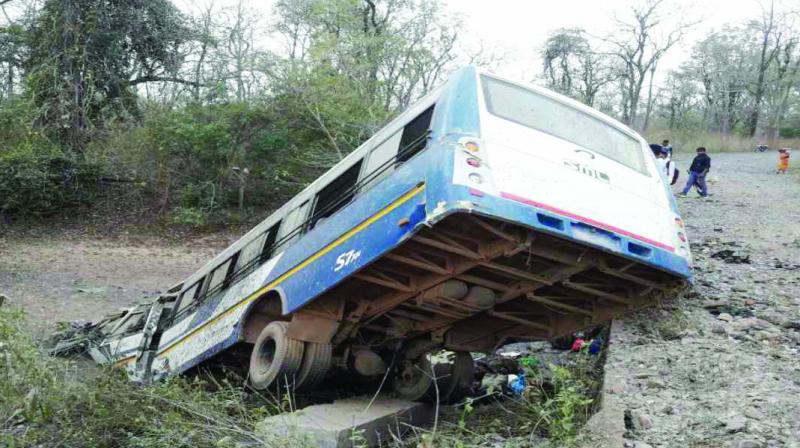 The bus carrying 30 jawans of DRG was blown up by Maoist insurgents near a bridge close to the forested village of Namaid in south Bastar district of Bijapur on Monday.

Bhopal: Two jawans of district reserve group (DRG) were killed and five others injured on Monday when Maoists triggered an improvised explosive device (IED) blast targeting a passenger bus in which they were travelling to Jangela in Chhattisgarh’s south Bastar district of Bijapur where Prime Minister Narendra Modi was scheduled to visit on April 14.

The bus carrying 30 jawans of DRG, a counterinsurgency wing of Chhattisgarh police comprising local tribal youths, was travelling from Kuturu, nearly 35 km from district headquarters town of Bijapur, to Jangla when it was blown up near a bridge close to the forested village of Namaid, police said.

“Two jawans of DRG were killed and five others injured in the blast”, director general of police (anti-Naxal operations), D.M. Awasthi said.

The front part of the bus got separated from its body under the impact of the explosion, police said.

The rebels then opened indiscriminate fire on the search party leading to a fierce gun battle that lasted nearly one hour.

Later, the ultras fled into the jungle. A jawan sustained minor injuries in the blast.

“We don’t foresee any threat to PM’s scheduled programme to the area on April 14 in the wake of the incidents. Maoists have no presence in the area. Only a couple of Jan Militia (local villagers who sometimes function as foot soldiers of CPI (Maoist) ) had triggered the IED blasts and then fled the area”, Chhattisgarh state intelligence bureau (SIB) superintendent of police (SP) D Ravishankar said.

Intelligence sources said around 400 sq km area around the venue of the PM’s scheduled programme, is being sanitised. Around 4,000 jawans have been engaged in the operation.

“A five-layer security network has been thrown around the venue of the PM’s programme. Twelve IAS officers and an equal number of IPS officers have been camping in the area to oversee security arrangement for PM’s scheduled visit”, a senior police officer posted in Bastar told this newspaper.

Maoist pamphlets and banners opposing PM’s scheduled visit to Jangela have been found near Mahadev Ghat in the district, police said.

The PM was scheduled to dedicate to the nation the “Ayusman Bharat Yojana” at Jangela, besides handing over houses built under PM’s Awas Yojana to 100 beneficiaries there.

He was also scheduled to inaugurate the newly built airport at Jagdalpur, headquarters of Bastar division in Chhattisgarh on the day.