Defence Ministry inked a contract with a defence firm for procurement of 1.86 lakh bulletproof jackets for Army at a cost of Rs 639 crore. 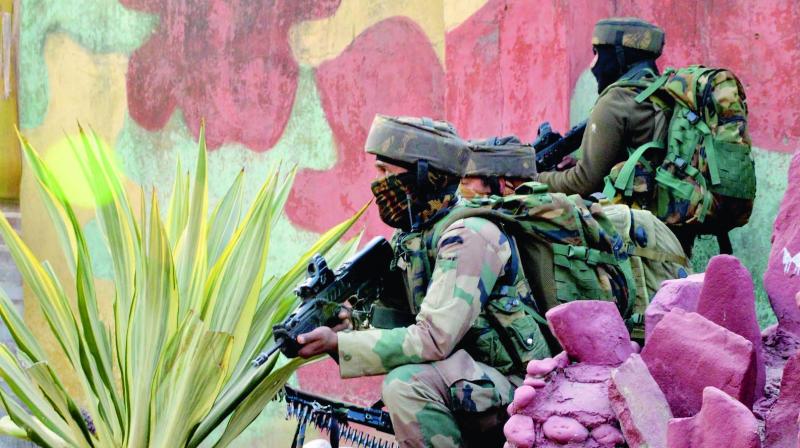 The new bulletproof jackets will provide '360 degree protection' to the soldier in combat, including from hard 'steel core' bullets. (Photo: File | PTI)

New Delhi: The nine-year long wait for the Indian Army has finally borne fruit, with the government signing the contract for the procurement of 1.86 lakh bulletproof jackets after successful field evaluation trials, the Indian Army said on Monday.

With this the soldiers of the Indian Army will see finally acquire the life-saving bulletproof jackets that they require during intense operations.

The Defence Ministry on Monday signed a contract with a defence firm for procurement of 1.86 lakh bulletproof jackets for the Army at a cost of Rs 639 crore.

The Army in a statement said, "A major contract through capital procurement route, for procurement of 1,86,138 bulletproof jackets (BPJs) has been signed. The impending requirement of the Indian Army for effective BPJs, has been met after successful conduct of stringent field evaluation trials."

The contract has been bagged by indigenous defence manufacturer SMPP Pvt Ltd, a small Delhi-based company which has a Research and Development Centre in the Okhla Industrial Area. It is the biggest order SMPP have ever signed.

The new BPJs will provide "360 degree protection" to the soldier in combat, including from hard "steel core" bullets.

The case was processed under the 'Buy Indian' category of the defence procurement procedure. "The provision of these new BPJs was done by Indian manufacturers who were successful in the trials. This has given an impetus to the 'Make in India' initiative of the government," the Army said.

"These bulletproof jackets will have ‘boron carbide ceramic’ which is the lightest material for ballistic protection. This makes SMPP BPJs the best of the class and will be able to provide ballistic protection at the lowest possible weight," Chairman and Managing Director of SMPP S C Kansal said.

The Army, which has struggled to acquire body armour for its soldiers because of an oppressively slow procurement system, says the new jackets have modular parts which provide "immense protection and flexibility to soldiers operating in different operational situations ranging from long distance patrolling to high risk room intervention scenarios". The jackets are designed to sustain the impact of even the latest hard steel core bullets in saving the lives of soldiers in operations.

The Defence Ministry said the new BPJs will boost the confidence of soldiers and the indigenously developed BPJs will give new impetus to the 'Make in India' initiative of the government and provide confidence that Indian industry is capable of fulfilling the requirements of the armed forces.

The year 2009 saw the government accept an Army requirement of 1.86 lakh bulletproof jackets. However, the order fell through after vendors could not clear trial rounds conducted by the army.