Pak actions in 1971 were genocide, Modi backs us: B'desh PM

Sheikh Hasina said India supports Bangladesh in its endeavour to declare Pakistani atrocities in 1971 as 'genocide'. 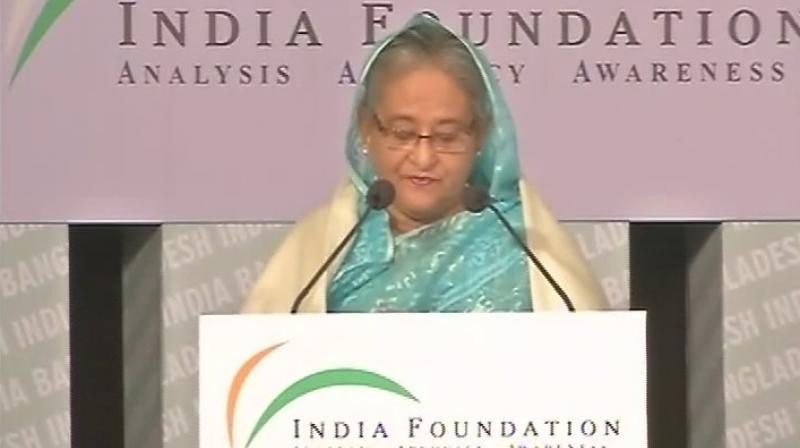 "We have put in place a multi-layered and effective bilateral security architecture with many dedicated joint institutional mechanisms for targeted and coordinated actions," said Hasina at India Foundation Awareness Programme here.

She said that security threats from state and non-state actors tend to undermine the efforts to integrate our economies and societies and that there should be more concentrated efforts to strengthen protection for our societies.

"We have amicably settled Land Boundary and Maritime Boundary," she added while reiterating her appreciation for leaders of all political parties and members of the Lok Sabha and Rajya Sabha of India for their unanimous support for the Land Boundary Agreement.

She noted that the Bangladesh Parliament recently adopted a unanimous resolution declaring March 25 as 'Genocide Day' in remembrance of the Pakistani atrocities during the Liberation War in 1971 and called on the international community to recognise the same.

Hasina added that Prime Minister Narendra Modi has made a commitment to remain with this effort of Dhaka.

Stating that 'India is our partner in this path to progress' the Bangladesh Prime Minister said that the two neighbors have witnessed tremendous progress in almost all sectors of cooperation namely, connectivity, power, trade and commerce, health and cultural exchange.

"To address trade deficit we are also working on getting more investment from India particularly in the special economic zones of Bangladesh. Already we are seeing great interest from the biggest business houses in India," she added.

On the Teesta issue, Hasina said that Prime Minister Modi has assured that his government will conclude the water sharing treaty at the soonest.