The ban on social media comes after violence in Bhadrak triggered by an allegedly abusive post on Lord Rama on Facebook. 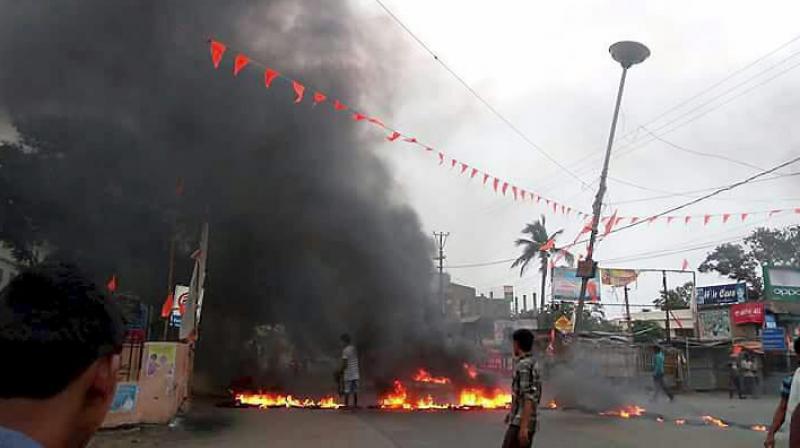 A scene after communal tension broke out in Bhadrak, Odisha on Friday. (Photo: PTI)

Bhadrak (Odisha): In a fresh case of violence, 2 shops were set ablaze at Bonth Chowk at the Bhadrak district. Massive police contingents have been deployed in the area, but some arsonists managed to stir the violence in the currently turbulent situation.

The curfew which was relaxed from 8 am to 12 pm on Monday, has been extended till 7 am Tuesday morning.

All social media has been blocked in Odisha's Bhadrak for 48 hours after violence in the town last week, said reports.

The ban on social media comes after violence in Bhadrak triggered by an allegedly abusive post on Lord Rama on Facebook.

On Sunday, the curfew was relaxed from 8 a.m. to 11 a.m. but later extended till 12 noon on Monday to allow people to acquire essential commodities.

Section 144 was imposed in Bhadrak after protests broke out.

Fresh violence erupted in some areas on Friday evening after talks failed to resolve the row triggered by alleged abusive remarks on social media against a particular community.

Though Section 144 was imposed in the town, officials had to clamp curfew as the situation deteriorated further.

About 15 platoons of police have been deployed.