Turnbull arrived in New Delhi yesterday for a four-day visit. This is his first visit to India. 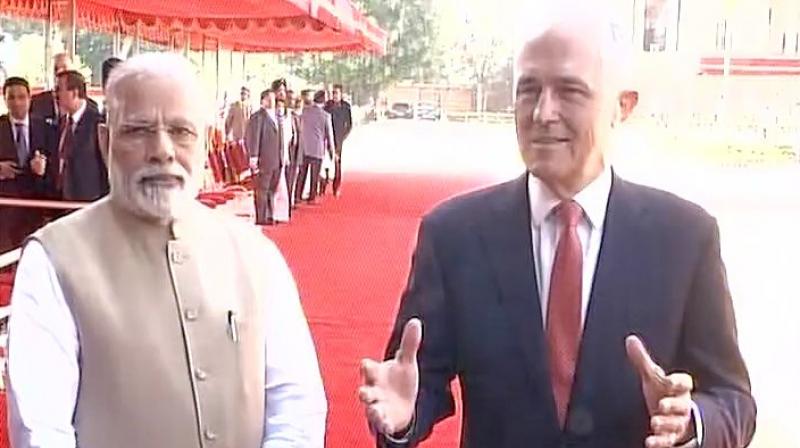 On Tuesday, Turnbull will visit Mumbai where he will attend several events, including an interaction with key business leaders and an energy round-table. (Photo: ANI Twitter)

New Delhi: Visiting Australian Prime Minister Malcolm Turnbull was all praises for his Indian counterpart Narendra Modi, saying that Modi is leading the country on the path of growth and development.

"Our ties are strong and will be stronger because of this visit. PM Modi is leading this most remarkable nation on an extraordinary journey of growth and development. The achievements of India are an admiration for the world and we look forward to working even more closely," he told the media here during his ceremonial reception at the President House.

"Half a million Australians are of Indian background. Both countries are tied together with a shared destiny," Turnbull added.

Turnbull arrived in New Delhi yesterday for a four-day visit. This is his first visit to India.

He is scheduled to hold delegation-level talks with Prime Minister Modi later in the day.

On Tuesday, Turnbull will visit Mumbai where he will attend several events, including an interaction with key business leaders and an energy round-table.

Cooperation in renewable energy, clean coal and bio-fuels will be high on agenda during his visit. A number of MoUs and agreements are also to be firmed up in the areas of security, environment, sports, science and technology and health.

Turnbull and Prime Minister Modi have had substantive meetings on the sidelines of the G-20 in Antalya in 2015 and in Hangzhou in 2016.