India   All India  10 Apr 2017  8 die in firing as violence mars bypolls in Srinagar
India, All India

8 die in firing as violence mars bypolls in Srinagar

The separatists’ poll boycott calls were by and large obeyed, with just 80,000 out of 12,61,000 registered voters turning up. 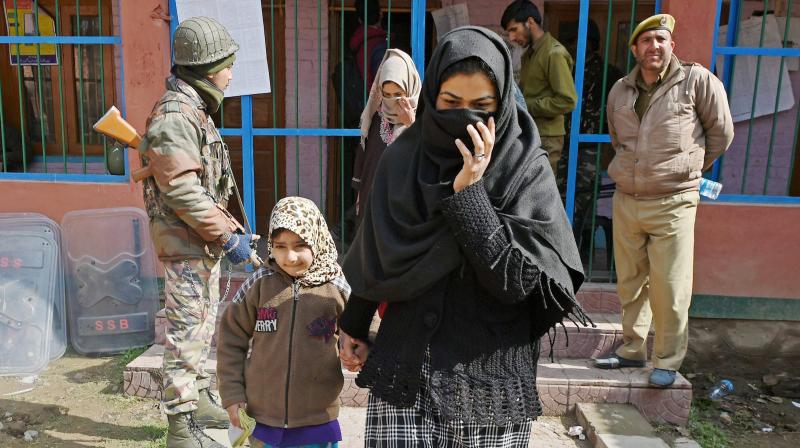 Women coming out from a polling station after casting their vote for Srinagar Parliamentary constituency of Jammu and Kashmir at Budgam in Srinagar. (Photo: PTI)

Srinagar: At least eight persons were killed and dozens more injured as the security forces fired on protesters and stone-pelting mobs across Srinagar as the Lok Sabha byelection was held on Sunday. Officials said over 100 security personnel were also injured as violent mobs attacked polling stations and clashed with the security forces along the street, mainly in Budgam district.

The separatists’ poll boycott calls were by and large obeyed, with just 80,000 out of 12,61,000 registered voters turning up at the polling stations.

“Approximately 6.5 per cent votes were polled, but this is a tentative figure as we are still getting the data, and it may increase,” said J&K chief electoral officer Shantanu at a press conference in the evening.

The statement issued by the government later quoted the CEO as saying that 7.14 per cent votes were polled. This is the lowest-ever turnout recorded in an election in Jammu and Kashmir since 1996, when the polls to the state Assembly took place after a gap of nine years of turmoil and peak insurgency.

“As many as 200 incidents of violence were reported from across the constituency, in which six civilians lost their lives and 17 others were injured. Over 100 police and other security personnel were also injured,” the CEO said. The authorities later said that eight persons were killed in the security forces’ action across the constituency. Shantanu added that during the mob violence some EVMs were snatched away. The machines were later recovered, he added, but did not say how. He also refused to answer any questions put by reporters.

An alliance of key separatist leaders has called for a two-day general strike in the Valley from Monday to mourn and protest against the deaths. The authorities are contemplating imposing curfew-like restrictions in parts of Srinagr and Budgam as part of precautionary measures, while Internet services were suspended on Saturday night.

Witnesses and police sources said irate crowds started shouting pro-freedom slogans, attacking polling stations and booths as soon as polling started at 7 am, forcing the authorities to halt voting in at least 10 polling stations. Security forces burst hundreds of teargas canisters to disperse the stone-pelting mobs. When this failed to work, they fired from rifles and pellet shotguns.

Most of the casualties took place in Beeru, Magam, Chadoora, Pakharpora and other areas of Budgam, the sources said. They added all these persons had got bullet and pellet wounds. Dozens of others, including security personnel, were injured in stone-pelting and retaliatory action by the security forces.

In the afternoon, violence spread to two other districts as well — Srinagar and Ganderbal.

The bypoll to the two Lok Sabha seats in the Valley — Srinagar and Anantnag — were necessitated by the resignations of PDP members, including party chief and chief minister Mehbooba Mufti.

While Ms Mufti, who was elected from her home constituency of Anantnag in the 2014 election, quit her Lok Sabha seat to fulfill the constitutional requirement following her appointment as CM, her party colleague Tariq Hameed Karra resigned from both the PDP and Parliament in protest against the PDP’s alliance with the BJP to form a coalition government in the state. Voting in Anantnag is due to be held on Wednesday.

The president of the Opposition National Conference, three-time former chief minister Farooq Abdullah, who is seeking election from Srinagar, alleged that the government failed to create a conducive atmosphere for polling.

The chief minister, Mehbooba Mufti, expressed deep anguish at the loss of lives. She said: “I am distressed to know that many of those killed were young boys who were yet to understand the intricacies of the issues.” She said she had reiterated time and again that peaceful means, not violence, was the only way ahead to get the state out of its present difficulties. “This is the time when people of all shades of opinion in the state should come together and help in stopping the cycle of senseless violence and bloodshed, which unfortunately has plagued Jammu and Kashmir for three decades now and left behind a trail of human tragedies,” she said.