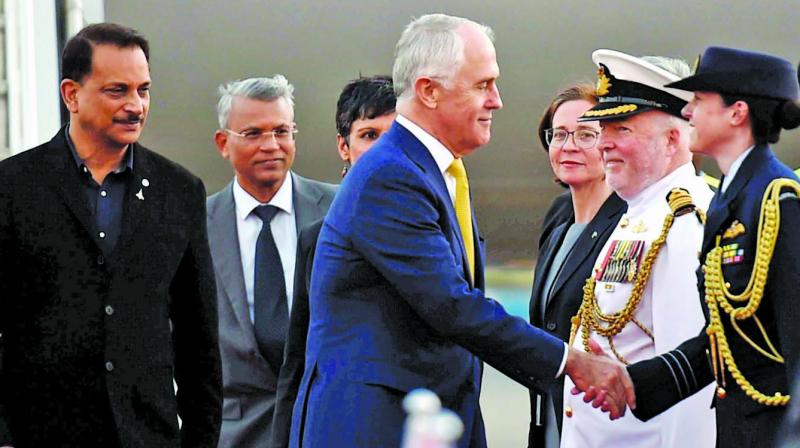 The two countries are likely to sign a number of MoUs covering defence and security, environment, renewable energy, sports and trade.

The visit is taking place at a time when decks are being cleared for the export of precious nuclear fuel material, Uranium, to India, though the much-delayed economic pact between the two countries will reportedly not be signed during the visit.

With Australia strongly backing India’s NSG membership bid, the issue is expected to come up during the talks between Mr Turnbull and PM Modi that will take place ahead of the Nuclear Suppliers Group’s plenary meeting expected to be held in June.

According to some reports earlier, the Australian government is involved in “lots of backroom negotiations” and engaged in “live conversations” with other member countries to garner support for India’s entry into the elite nuclear club. Speculation is rife that Australia could also be interested in joining the Indian Malabar naval exercises that are held with the US and Japan.

Mr Turnbull, who will hold talks with Mr Modi on Monday, had earlier said Australia will be a reliable provider of uranium among other energy resources to India. MEA officials said while Australia can now export Uranium to India, commercial deals that factor in price, quality and other issues are yet to be negotiated.

“The Comprehensive Economic Cooperation Agreement (CECA) will not be signed during this visit. Negotiations are underway but the pact will not be signed,” Australia’s High Commissioner to India, Harinder Sidhu, was quoted by news agencies as saying last week.

On the issue of supply of uranium from Australia to India, joint secretary (south) in the MEA, Jaideep Mazumdar, had said last week that the Australian parliament had cleared a legislation for the supply of uranium to India last year and now “commercial negotiations” for it are going on, indicating that there was no firming up of any such pact so far.

Australia reportedly has about 40 per cent of the world’s uranium reserves and exports nearly 7,000 tonnes of the yellow cake annually.