Sheikh Hasina offered namaz near Jannati Gate and also recited a prayer for the Sufi saint. 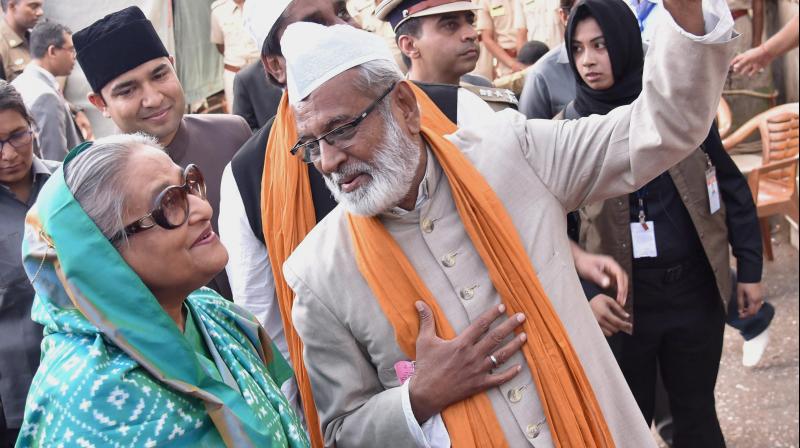 New Delhi/Ajmer: Ahead of the Presidential banquet late in the evening in New Delhi and her meeting with the Indian business community scheduled to take place on Monday morning, Bangladesh Prime Minister Sheikh Hasina on Sunday morning paid obeisance at the shrine of Khwaja Moinuddin Chishti here and offered a chadar (shawl) at the grave of the 12th century Sufi saint.

According to news agency reports from Ajmer, Ms Hasina, accompanied by five Bangladesh ministers in the 26-member delegation, visited Ajmer by helicopter. She reached the shrine 10:30AM, and was received by the officials of the dargah’s Anjuman Committee (management committee). She offered prayers for 15 minutes and stayed at the shrine for about an hour.

Ms Hasina offered namaz near Jannati Gate and also recited a prayer for the Sufi saint. Khadim Kalimuddeen Chisti gave “tabarrukh” and a scarf to the Bangladesh PM.

The Anjuman committee also gave a welcome address in her honour. Thereafter, she made a brief halt at the Circuit House, and flew out of the city by noon. Among those who accompanied Ms Hasina were minister for liberation war affairs AKM Mozammel Haque, minister of water resources, Anisul Islam Mahmud, and minister of law Anisul Haq. Earlier, she visited the shrine with her family on January 13, 2010.