An old bond revived: Ladakhis and their dzo

This vast ice desert lying in the lap of the Himalayas is an ecologically sensitive zone. 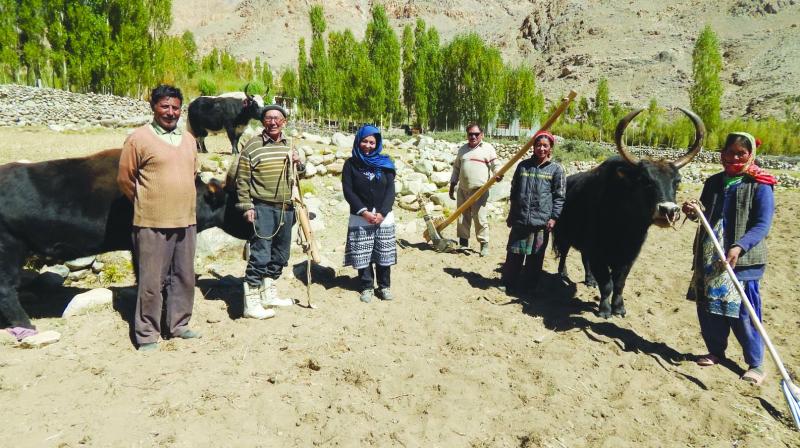 Two families and their dzos

A male hybrid of yak and cow, the dzo has always been crucial for agriculture in Ladakh that at 9,800 feet is easily one of the coldest, most daunting regions for farming. Although the yak is a bigger, studier animal, locals prefer the dzo. It is more nimble and suited to plough the fields.

This vast ice desert lying in the lap of the Himalayas is an ecologically sensitive zone. For centuries, communities here have stuck to traditional agricultural practices that conserve and replenish scarce natural resources to maintain this delicate balance.

With mechanisation creeping in, more and more families have been replacing their trusted dzo with the mechanised version — the tractor. True, it is faster, but it also allows rampa (weed in Ladakhi) to grow unchecked, eating into the space of the cultivated crop. Ploughing with the dzo on the other hand allows ample time for uprooting these. There are other glaring disadvantages. Mr Wangail a farmer in his mid-eighties in Ullay village says: “The conditions of roads leading to our village at a height of 15,700 feet, is poor. Why would I rent a tractor and bring it up? It produces noise and fumes — bad for our environment. Much better to use a dzo. ”

Mr Wangail’s logic eludes many others but he is quick to dismiss it as herd mentality. “People just imitate other people. If villagers of Hemis Shukpachan see their neighbouring village using tractors, they will simply follow, without questioning why”, he remarks, clearly exasperated.

Mr Wangail is pragmatic, belonging to a generation that has faced the elements, toiling on the fields with their hands, their animals and some tools. But for Ishay Dorjay, 70, also a farmer living in Phyang village, the concerns go beyond the pragmatic.

People are losing their social and cultural traditions, their connect with the land, he believes. “Earlier tilling the land was a way of life for people; it sustained them. But now they don’t till at all and this is sad.”

Interestingly Mr Dorjay’s farm lies adjacent to Sonam Rigzin’s — another old farmer. The neighbours have come to an understanding, a unique partnership. They share all the tasks on both farms, sticking to traditional farming ways. The dzo is central to this. The animal strikes a lonely but imposing figure in a village where mechanisation has been edging it out.

“Its very difficult for us; struggling to keep a dying tradition alive. Its like going against the tide.”, says Mr Dorjay. He quickly adds, “But this is what makes us different.”

The families of Mr Rigzin and Mr Dorjay fully support this partnership and participate vigorously in the common tasks. Says Ms Dolkar, 50, “The most important thing is that our bonds have become stronger.” Dressed in loose woollen garments, she moves about with a spring in her step “We are happy being together, doing this together.”

Being closely bonded lies at the heart of Ladakhi society. There is a sharing of labour, tools and animals to a remarkable degree. This defines the age-old “Bes System” where community members harvest the crop on each one’s field in turn. Collectivisation not only makes work easier; it makes for cohesion within society.

Slowly this old culture has been fading out, replaced by a mechanised, individualised approach to work and social relations.

Ms Dolker has been witness to this, “It became each one for themselves. Farmers began to hire Nepali and Bihari labourers from Leh to work on their fields. After paying them they’d hardly save anything and began losing interest in the land”, she says. “Earlier we used to be all together. Now see what modern agriculture has done to our social bonding!”, she sighs.

Ms Dolker’s lament is reflective of something larger playing itself out in the region.

Communities living in the highland plateau have combatted the elements by evolving a unique way of life based on mutuality. Coming under fire today, this is also leading to traditional agricultural practices being abandoned.

The earlier system of grinding grains preserved nutrients. With mechanised grinding at high temperatures, this is being destroyed.

Organic farming that was the norm, is giving way to increased use of chemical fertilisers and pesticides.

The combined fall-out of these changes is now visible. In Phyang, fields after fields are emptying out with farmers increasingly migrating to Leh for work. Sonam Rigzin is worried. “Now with fields lying fallow, what are people going to eat after some years? When will they realise how important it is to till the land, grow food and rear livestock.”

In the churning that is taking place in Ladakh, Sonam Rigzin and Ishay Dorjay signify a drop in the ocean.

They are holding out in the face of relentless change; upholding a throw-back to the simpler and sustainable way of life of the yore. There are some who are taking their cue. Those who are rethinking have taken a step further to revert to traditional practices.

“This is the second year in a row when we are using the dzo for ploughing. Nor are we using chemical fertilisers”, says a beaming Phungchok Dolma from Gangles village.

The two families and their dzo in Phyang village stand out in contrast to the emerging trends in the region. They strike a powerful image. The lives they have chosen are a compelling narrative of contemporary Ladakh — the change sweeping over the “Land of the High Passes” and the small voice resisting this change.