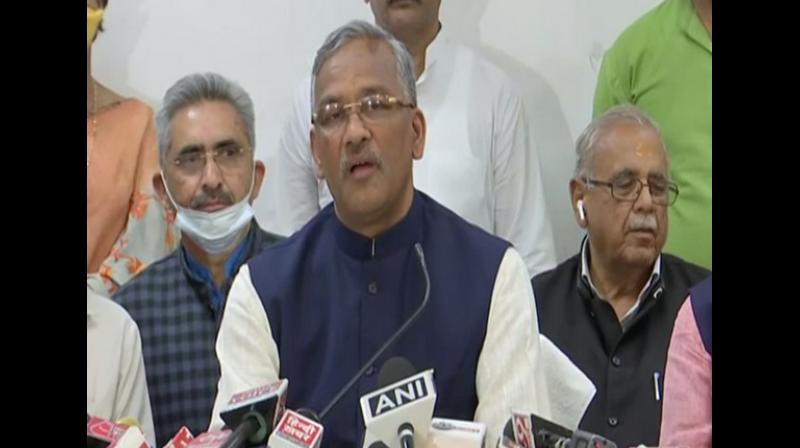 Sensing that his resignation could upset his supporters, Rawat told Nadda it was a “collective decision” taken by the party leadership. — ANI

New Delhi: Facing discontentment from a section of BJP MLAs and ministers over his style of functioning, Uttarakhand chief minister Trivendra Singh Rawat on Tuesday tendered his resignation as the party’s top brass did not want the growing dissension to dent the party’s poll prospects. With the Assembly polls just 10 months away and the Congress, the main Opposition party, now in disarray, the BJP leadership did not want to take any chance to give strength to the Opposition camp, including the AAP, which has decided to contest the polls this time. Mr Rawat would have completed four years in office on March 17.

Sensing that the CM’s resignation could upset his supporters and his constituency, Mr Rawat, who had held a meeting with BJP president J.P. Nadda in New Delhi on Monday, said it was a “collective decision” taken by the party leadership that someone else should lead the state now. Mr Rawat’s Cabinet colleague Dhan Singh Rawat, who is also his batchmate from college, is said to be the frontrunner to succeed him. The names of Union minister Ramesh Pokhriyal “Nishank”, Rajya Sabha MP Anil Baluni and senior leader Ajay Bhatt are also doing the rounds.

Mr Trivendra Rawat submitted his resignation to governor Baby Rani Maurya at Raj Bhavan in Dehradun on his return from New Delhi, where he had met the BJP’s central leadership.

After submitting his resignation, Mr Rawat said the Uttarakhand BJP Legislature Party will meet at the state party headquarters Wednesday to choose his successor. Central observers Raman Singh and Dushyant Kumar Gautam are due to land in the state late on Tuesday to oversee the process of the change of guard in the state.

Earlier, before going to Raj Bhavan, Mr Rawat was closeted with his associates at the CM’s residence, including Cabinet minister Madan Kaushik and Mr Dhan Singh Rawat.

After submitting his resignation, Mr Rawat addressed a press conference at his residence and said the party had “collectively decided” someone else should lead the state now.
“I feel really honoured that my party gave me the opportunity to serve Devbhoomi for nearly four years,” said Mr Rawat. He said that during his tenure, several steps were taken for the empowerment of women, including a recent ordinance giving ownership rights to women in the ancestral property of their husbands.