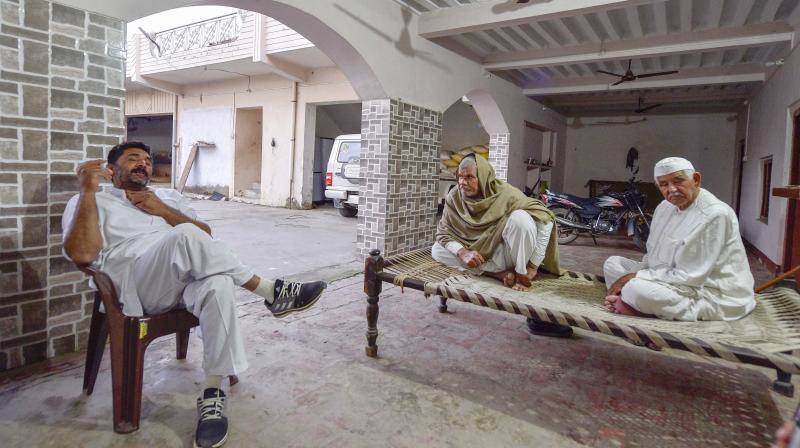 Muzaffarnagar: Farmers are ready to stay put on Delhi borders to protest against three agri laws for the remaining three and half years of the Modi government's second term and the stir cannot be "culled" any which way the Centre tries, legendary farm leader Mahendra Singh Tikait's son Narendra Tikait says.

Narendra, who does not hold any official position in Bharatiya Kisan Union, formed by his father in 1986, and mostly focusses on the family's farming activities but is as vocal on issues concerning farmers as his two elder brothers Naresh and Rakesh Tikait who are leading from the front in the agitation that has been continuing for more than 100 days.

Speaking to PTI at his home in Sisauli, Muzaffarnagar district, 45-year-old Narendra also said his two brothers and the entire Tikait family would leave the protest if even smallest of any wrongdoing is proved against even a single family member, as he rejected allegations by some quarters that they have built properties and made money from the agitation.

The eldest brother Naresh Tikait is BKU president, while Rakesh Tikait holds the position of national spokesperson of the organisation, which under Mahendra Singh Tikait's leadership in 1988 had laid a virtual siege to Meerut in pursuit of higher prices for sugarcane, cancellation of loans and lowering of water and electricity rates. The same year, BKU held a week-long protest in Delhi's Boat Club to focus on the plight of farmers.

After Mahendra Singh Tikait's death in 2011, Naresh and Tikait have been leading the main organisation in various roles, though a number of faction groups have emerged in various parts of the country over the years.

Narendra said the Centre is under any misconception that it can cull the farmers' protest like it has "culled" other agitations in the past using various tactics.

"I am here in Sisauli but my eyes are there at the protest," he said, adding that he keeps visiting Ghazipur border where hundreds of farmers and BKU supporters are camping since November 2020.

"This government has a misconception, probably because it never faced such kind of protest, but we have seen agitations and been part of those for 35 years. This government only has an experience of facing smaller protests and of getting those culled through various tactics," he said.

"They cannot crush this protest by any means. This will continue for as long as our demands are not met. This government has a tenure of three and a half years left, and we can continue the movement till the end of its term," he asserted.

The younger and less publicly known Tikait said farmers would vacate the protest sites only after their demands are met completely and not on the basis of any future assurance or partial agreement on demands.

"If the government keeps saying again and again that crops would be bought at MSP, then why cannot they give this in writing? They keep harping about giving subsidies on LPG cylinders, but that subsidy is also gone," he said.

Tikait alleged that the Centre has done the same to the school education sector where private institutes are thriving and minting money while the condition of government facilities keep getting poorer and poorer.

"Now they want business houses to store crops, hoard those and later sell at desired rates. Their push is for business and that's the agenda, he said, adding farmers are already reeling under the high cost of labour and fuel prices.

Asked about allegations that the Tikait family holds land worth hundreds of crores and that BKU is involved in hooliganism in the region, he said, "There is nothing that they (the government) could find against us and therefore this (levelling allegations) is happening. If they find a single fault in any member of our family, then we will return from Delhi."

He also rejected allegations of hooliganism by BKU as incorrect.

Describing his family's position as Chaudhary or head of Balyan Khap (the Balyan caste council), Tikait said this Khap leads 84 villages in the region as per traditions continuing for ages.

His eldest brother Naresh Tikait is the head of the Balyan Khap, which makes him de facto head of 'Sarv Khap' (all caste councils).

"We have 84 villages (belonging to the Balyan Khap). By that measure, we have 3 lakh bigha of land. When our father passed away, he had passed on the responsibility of 84 villages to us. We are Chaudhary of 84 villages and all this is ours only. What are we going to do by seeking more money, he said.

Tikait also hinted at a 'Sarv Khap' meeting in Soram in near future to further mobilise regional support if protests continued further on Delhi's borders and the government does not agree to farmers' demands.

Thousands of farmers are camping at Delhi's border points in Tikri, Singhu and Ghazipur with a demand that the Centre repeal three farm laws that were enacted in September 2020 and make a new law guaranteeing minimum support price (MSP) for crops.

The farmers fear the new laws would destroy their livelihoods and leave them at the mercy of corporations.

The government, which has held 11 rounds of formal talks with the protestors before the discusses broke down, maintains that the laws are pro-farmers.