Lance Naik Muiwo was serving in Territorial Army at 165 Battalion in Leimakhong in a wireless department in Manipur. 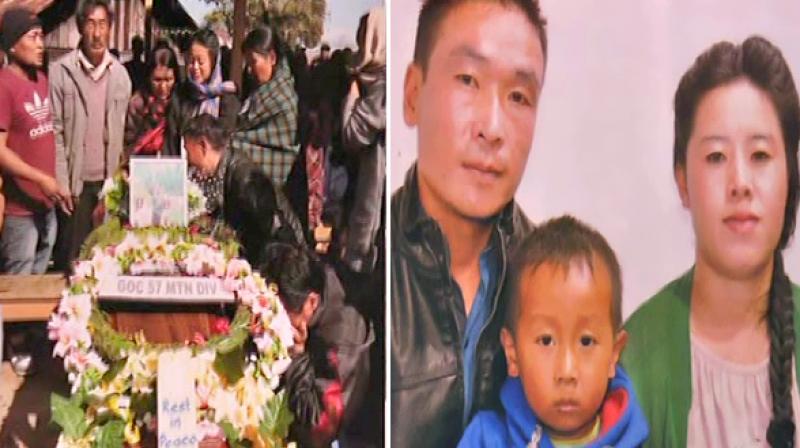 According to the family's statement, they were not informed about the death of Lance Naik Muiwo. (Photo: ANI)

Imphal: The family members of Lance Naik Yangmi Muiwo have alleged foul play in the death of the 34-year-old personnel that was described as suicide by the Army authority.

Speaking at Manipur Press Club in Imphal, Timrawon Muiwo, bereaved wife of the deceased jawan, raised doubts over his death.

Lance Naik Muiwo, who was serving in Territorial Army at 165 Battalion in Leimakhong in a wireless department in Manipur, was found dead with his throat slit on January 18, 2018, at a storeroom.

Expressing disappointment over the negligence of the army officials, Timrawon said that the family was not allowed to get near his lifeless body and was asked to wait for the next day.

According to the family's statement, they were not informed about the death of Lance Naik Muiwo.

"I was at the paddy field when I received the news about my husband's deceased from my sister-in-law. On the same day, we went to the Leimakhong camp, where my husband was murdered. But we were not allowed to see his body by the army official. We were asked to come the next morning and even on that day, we were again denied to see his dead body. Later in the evening, they took the dead body of my husband to Jawaharlal Nehru Institute of Medical Sciences (JNIMS) hospital in Imphal for post-mortem and there only we saw the lifeless body," she said.

"Yangmi was like a son to me. We got the information about his demise from one of the family friends, who is also working in the army at Leimakhong camp. He had informed us that Yangmi's throat was slit after which he died. Soon after that, we came to Ukhrul from our village (Halang village) and then went to Imphal. By the time, we reached Leimakhong camp, it was already dark," added K. Machinel, uncle of the deceased.

After no response came from the army, three of the family members rushed to Sapormeina Police Station, under Kangpokpi District and lodged an FIR. Following this, the police team came to Leimakhong 57th Mountain Division Garrison and sent the body for an autopsy to Jawaharlal Nehru Institute of Medical Sciences mortuary in Imphal.

"When the army officials denied showing his body on the second day, we along with our family elders lodged an FIR at Sapormeina Police Station which is under the jurisdiction of Kangpokpi district. Thereafter, Commanding Officer of 165 Territorial Army had assured us that justice will be done. But till now, no one has been arrested and we are still waiting for justice," said the wife.

Though the officials claimed that it was a suicide case, the post-mortem report suggested that he was murdered, she added.

The family members told the media that two Lt. Col. went to Muiwo's village and met the locals and the village head and tried to label the homicidal case as a suicide case. The cited family tussle as the reason, which was not true.

"After the FIR lodged, we enquired about the ongoing investigation progress. Since we didn't get any help from police, today we came to media to seek help for justice," the family alleged.

The family members also appealed to the state government to look into the matter.

"During this difficult juncture of my life, I request the honorable chief minister of our state and DGP to look into the matter and investigate the case and to prevail justice for my husband's death," added Timrawon.

Lance Naik Yangmi Muiwo, son of Diamond Muiwo of Halang Village in Ukhrul District, is survived by his wife and a son, who is just 3 yrs and 10 months old.