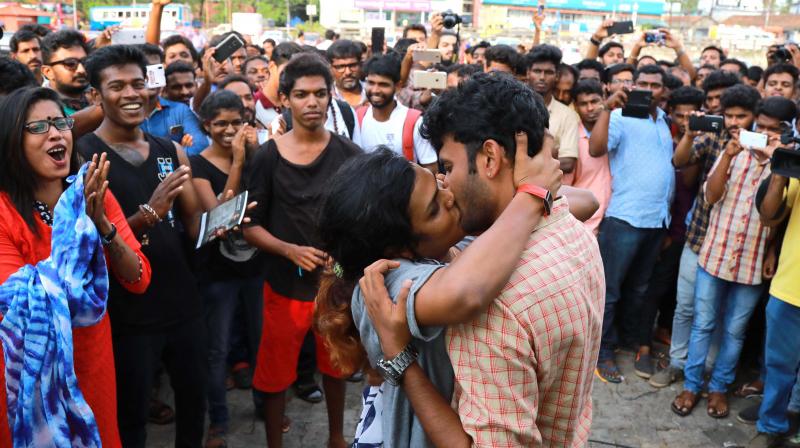 Thiruvananthapuram: Acrimonious scenes were witnessed in Kerala Assembly on Thursday as the ruling LDF and the Opposition UDF MLAs nearly came to blows over chief minister Pinarayi Vijayan’s remarks on moral policing.

Trouble erupted during the Zero Hour when the House was discussing a notice for an adjournment motion moved by UDF on the recent moral policing incidents, including one by Shiv Sena activists in Kochi on Wednesday.

The House plunged into turmoil at the fag end of the discussion on the issue when Mr Vijayan said that there are doubts that Shiv Sena activists at Kochi were hired by the Opposition.

UDF members, many of them already squatting in the well of the House protesting against the police lapse in preventing the Kochi incident, got agitated over the remark.

Mr Vijayan’s comments that “I doubt whether you (UDF) are behind yesterday’s drama in Kochi” further infuriated the already agitated UDF members. When some of the Opposition members moved towards the chair of the chief minister, the LDF MLAs immediately formed a protective ring around Mr Vijayan.

There were heated exchange of words between the members of both fronts. Even the chief minister was seen making a point to the UDF MLAs. He later clarified that when a UDF member allegedly made some threatening gestures at him, he had remarked “do not threaten me... I have seen many such threats”.

Mr Vijayan also rejected the Opposition’s charge that he had also rushed to the well of the House. Sensing the rising temperature in the house, Speaker P. Sreeramakrishnan, ordered temporary adjournment.

When the House re-assembled after nearly an hour, the Opposition boycotted further proceedings in protest against the chief minister’s refusal to to take back his words against the UDF.