Leader of ISIS Khurasan module among two arrested in Kanpur. 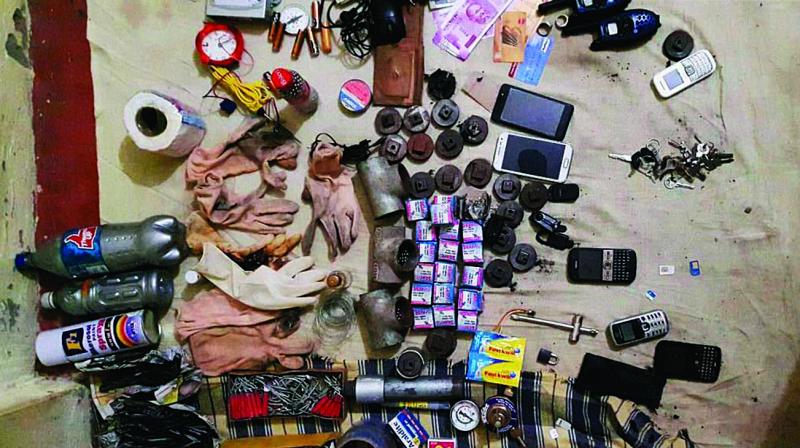 Arms, ammunition and other items recovered after suspected ISIS terrorist Saifullah was killed in a 12-hour long operation near Lucknow. (Photo: PTI)

Lucknow: The UP ATS on Thursday arrested two more persons in connection with the blast in the Bhopal–Ujjain passenger train and the Lucknow terror operation that ended on Wednesday.

The arrests were made from Kanpur. The arrested persons are Ghaus Mohammad Khan, said to be the mastermind of the Khurasan module, and Azhar Khan, who was supplying arms to the members of the module. The name of Azhar was mentioned in a diary recovered during the encounter on Wednesday.

Ghaus Mohammad aka Karan Khatri, is a retired Air Force personnel — he was an airman — and had been providing literature and arms for radicalising youth. He has been living in Jajmau in Kanpur after leaving the Air Force in 1993.

The Uttar Pradesh police had said that the youth killed in an anti-terror operation in Lucknow and his five arrested associates were “self radicalised” and were trying to build an Islamic State Khurasan module in the state capital.

Ghaus Mohammad’s sons Adil and Abdul said that they had no inkling about their father’s activities and links with the terrorist organisations.

“We saw this news on TV channels but our father denied having any connection with such activities, he said he was innocent,” the sons said.

They said that they had never seen the slain terror suspect Saifullah, who was killed in an encounter in Lucknow on Tuesday night. They also stated that unknown persons never visited their house.

The sons said that their father had spoken to them on Tuesday and had said that he was going to his native village. The blast in the Bhopal–Ujjain express took place on Tuesday.

ADG (law and order) Daljit Chaudhary told reporters that he two suspects had been brought to Lucknow and were being interrogated by various agencies. He said that the members of the module had been arrested.

It may be recalled that Saifullah, a suspect in the train blast case, was killed while hiding in a building in Lucknow after a 12-hour operation on Wednesday. Security forces who surrounded the building had repeatedly asked him to come out, but to no avail. It is said that he and his group planned to blow up a Sufi shrine within a month.