India   All India  10 Mar 2017  No Hindu, Muslim or Christian will endorse terror; that is our culture: Rajnath
India, All India

No Hindu, Muslim or Christian will endorse terror; that is our culture: Rajnath

The minister also said 8 suspects had been arrested so far in MP-UP terror incidents. 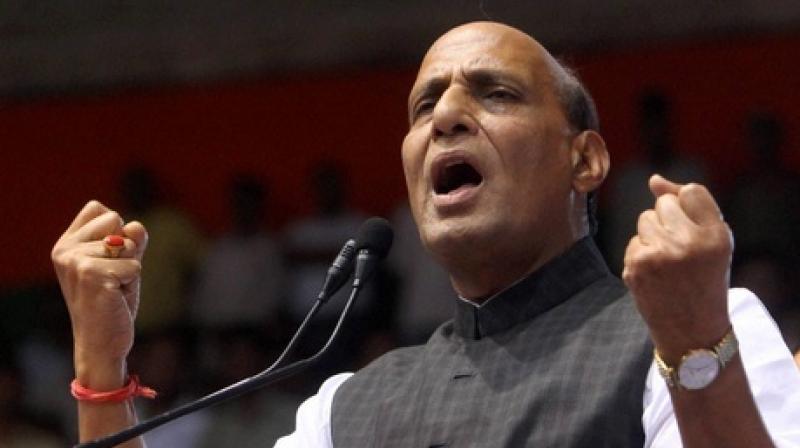 New Delhi: Eight suspects have been arrested so far in connection with the blast on a train in Madhya Pradesh and the subsequent anti-terror operations leading to the killing of alleged terrorist Saifullah in Lucknow, Home Minister Rajnath Singh said in Rajya Sabha on Friday.

Making a statement during the Zero Hour on incidents in Madhya Pradesh and Uttar Pradesh on March 7 and 8, he also showered praise on Saifullah's father Sartaj who has refused to take the body of his son, amid thumping of benches by the entire House.

After the statement, several Opposition members wanted to seek clarification from the minister. Singh would reply to members on the "next working day".

"Till March 8, six accused were arrested. With the arrest of two more accused by UP ATS on March 9, total 8 arrests have been made in these incidents so far," the minister said.

Singh, who had made statement in this regard in Lok Sabha yesterday, said UP ATS sieged the house in which Saifullah was hiding in Haji Colony area of Lucknow and made vigorous attempts to nab the suspect.

"However, he refused to surrender and started firing on ATS team. Ultimately, after 12 hours of effort, the ATS team entered the room in which Saifulla was holed up and in the ensuing encounter, this suspected terrorist was killed," he said, and gave other details regarding the incidents.

He said that due to the prompt action taken by the police of both the states, "a possible threat to national security was successfuly averted". Praising Sartaj, Singh said the "entire country is proud of him".

The minister said India's culture is such that no Hindu, Muslim or Christian will endorse any terror activity in the country, as members from all sides thumped of their desks.

Senior Congress leader Digvijay Singh said the statement of Sartaj reflects the sentiments of the nation and there could be no compromise on terrorism.

Sitaram Yechury (CPI-M) said since the minister has made a statement on the issue, members should be allowed to seek clarification. He got support from several other Opposition members.

Later it was decided that Singh would make himself available to members for clarification on the next working day.

According to UP police, Saifullah belonged to a self-proclaimed group of ISIS supporters.