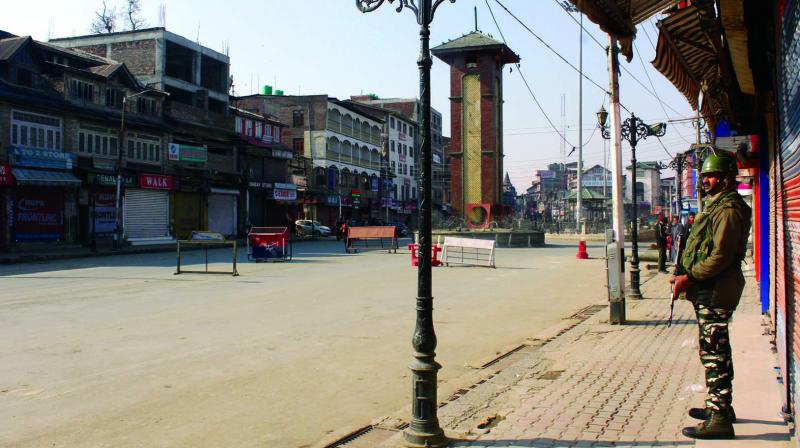 A security personnel stands guard at a closed market in Srinagar on Sunday. (Photo: HU. Naqash)

SRINAGAR: A partial to complete shutdown was observed amid renewed tensions in Kashmir Valley on Sunday to commemorate the seventh death anniversary of Parliament attack convict Muhammad Afzal Guru.

Guru, a resident of Doabgah suburb of Kashmir’s north-western town of Sopore, was hanged in Delhi’s Tihar jail on February 9, 2013.

While shops and other businesses, including weekly fleet market, popularly known as ‘Sunday Market’, in summer capital Srinagar remained closed, the public transport services were badly affected here and elsewhere in the Valley in response to the strike call issued by Mirwaiz Umar-led faction of the separatist Hurriyat Conference and outlawed Jammu Kashmir Liberation Front (JKLF).

However, private cars and other vehicles and auto-rickshaws were seen plying as usual across the Valley. Also, shops, mainly groceries and pharmacies, were open at places, reports pouring in here said.

The authorities said that the day passed off peacefully and claimed the strike calls were largely ignored by the people. Director General of Police, Dilbag Singh, had earlier said that the police and other security forces were fully prepared to foil any attempt at disturbing peace.

It was for the first time since August 5 last year- when J&K was stripped of its special status and split up into two Union Territories — that separatist organisations issued strike calls.

The police on Saturday registered a case against the JKLF for issuing strike call for February 9 and 11 to commemorate the hangings of Guru and Muhammad Maqbool Bhat, a co-founder of pro-independence Jammu Kashmir National Liberation Front (JKNLF) who was also hanged in Tihar jail in 1984 on charges of murdering an intelligence official Amar Chand during his “pursuits” in the Valley way back in 1960s.

The officials said that a case under Sections 10, 11 and 13 of the Unlawful Activities Act has been registered at Srinagar’s Kothi Bagh police station against the JKLF. The pro-independence JKLF was in March last year declared as “an unlawful association” under Section 3(1) of the Unlawful Prevention Act by the home ministry, saying it is “actively engaged in inciting secessionism and funnelling of funds for fomenting terrorism.”