10 die as bus comes into contact with power cable

The death toll was likely to rise as some of the seriously injured persons have sustained more than 60 per cent burns. 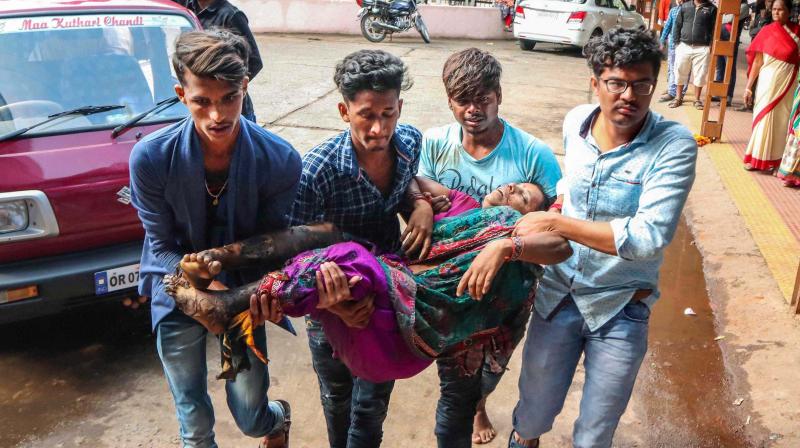 People carry an injured woman to a hospital after a passenger bus caught fire after coming in contact with a power transmission line Ganjam district’s Golanthara area in Odisha on Sunday. (Photo: PTI)

BERHAMPUR (ODISHA): At least 10 passengers were on Sunday reportedly electrocuted and 27 sustained injuries, many of them seriously, when the bus in which they were travelling came into contact with 11KV live wire at Melapaturu village under Golanthara police limits near Berhampur city in Odisha’s Ganjam district.

The injured were rushed to MKCG Medical College and Hospital, Berhampur.

The death toll was likely to rise as some of the seriously injured persons have sustained more than 60 per cent burns.

“Have retrieved five bodies from the bus. As many as 10 passengers have been admitted to casualty department of MKCG Medical College and Hospital.

Dambaru Reddy, a resident of Melapataru, said as soon as the villagers heard the shouting of passengers, they tried to rescue them. However, it took them 30 minutes to disconnect the live wire.

Sukanta Sethi, chief fire officer, Odisha, said deputy fire officer from Berhampur along with other staff rushed to the spot and shifted all the passengers to MKCG Medical College and Hospital.

“As soon as we got the information, our officers along with rescuers rushed to the spot. All the injured persons were taken to hospital in our vehicles. The villagers who had reached the spot had done a tremendous work by disconnecting the live wire from the bus and getting most of the passengers out of the bus,” said Mr Sethi.

The passengers, reports added, were returning to their village after attending a wedding feast at Berhampur.

In another mishap, a bus carrying 60 passengers also came into contact with 11KV live electric wire.

There were no reports of the passengers sustaining any injuries, though four tyres of the bus were gutted. The driver of the bus was missing at the spot.