Will campaign for TMC for 2019 LS polls, join TMC if needed: Hardik Patel

'Hardik is like my younger brother. He has a very good sense of politics and he is very sensitive too,' Mamata Banerjee said. 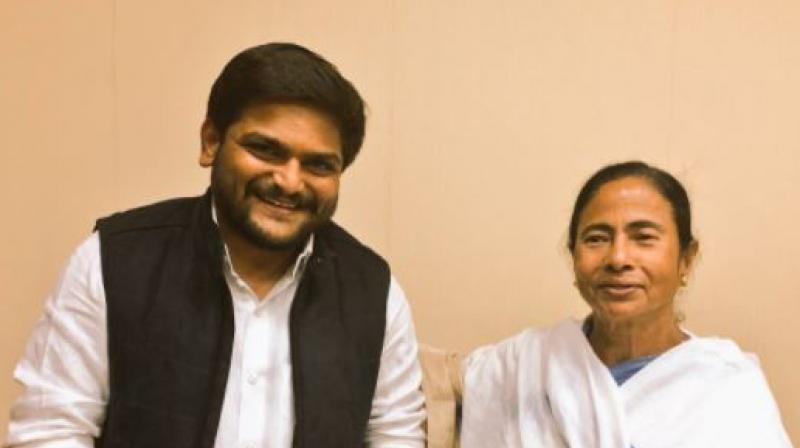 Patel said that Banerjee asked him to join TMC and he would do so if there was a need for it.

Equating Banerjee to India's former prime minister Indira Gandhi, Patel said that he has never seen such a feisty leader.

The PAAS leader also declared that he has promised to campaign for Mamata Banerjee in West Bengal during the 2019 Lok Sabha polls.

"I will come here in 2019 to campaign for her. In the country, there is no Opposition apart from the Congress and the Trinamool Congress. They have to come together and bring other parties together," Patel said.

Mamata Banerjee herself was also full of praises for the young Patel leader.

The Chief Minister said that she advised him to join politics as it was politicians who make policy decisions.

"Hardik is like my younger brother. He has a very good sense of politics and he is very sensitive too," Banerjee said.

Earlier, Patel had met Bihar Chief Minister Nitish Kumar and promised to work with him for ensuring Patel-equivalent communities in other states get reservations.

The pro-reservation movement leader had said during his campaign in the recently-concluded assembly elections that he would decide on joining politics in two years, when he would be eligible to contest polls.