Seven Neera producing companies had invested several crores of rupees but with less production, they have become loss- making entities. 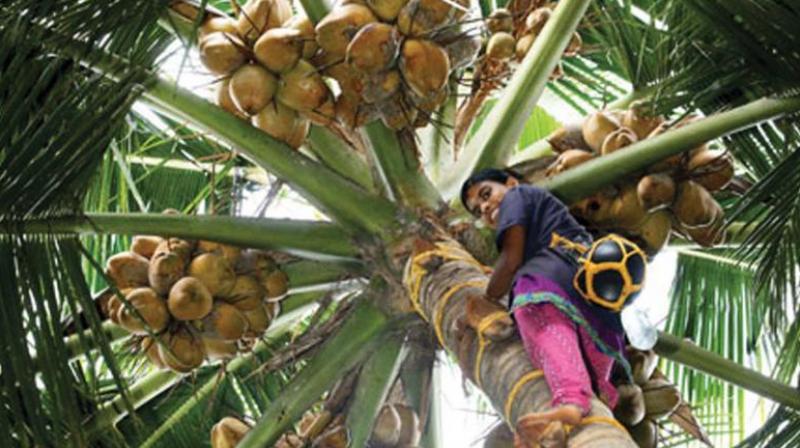 Some of the reasons for the failure of Neera have been poor marketing techniques, low shelf life and inadequate technology used to make it.

When it was introduced by the Coconut Development Board, Neera was touted as the saviour of coconut farmers in Kerala. But from the high of 40,000 litres per day two years ago, the production has now plunged to 2,000 litres a day. The Asian Age uncovers the reasons behind the rise and fall of Neera.

Thiruvananthapuram: Neera, Kerala’s own coconut brew launched with much fanfare to cheer the spirits of the people, especially the farmers a few years ago, has lost its vigour and is hardly visible in the market.

While a blame game is on about who spoiled the chances of Neera making a breakthrough, the agriculture ministry is keen on achieving a convergence between various technologies used to make it.

Some of the reasons for the failure of Neera have been poor marketing techniques, low shelf life and inadequate technology used to make it.

Seven Neera producing companies had invested several crores of rupees but with less production, they have become loss- making entities.

The production of Neera, the unleavened toddy collected from coconut flowers, was promoted by the Coconut Development Board under the then chairman T. K. Jose, at present additional chief secretary, industry and commerce. The CDB helped in setting up a number of coconut producing companies where Neera technicians, including tappers and coconut pluckers were appointed. It gave 25 per cent subsidy or Rs 50 lakh to Neera companies which bore the remaining 25 per cent.

“Jose held talks with the then KAU vice- chancellor P. Rajendran in 2015 about transferring the KAU technology to the CDB. The KAU demanded a paltry royalty of Rs 2 per litre. But Jose wanted it free which was not acceptable to the KAU. Therefore, Jose approached Dr. C. Mohankumar, director, SCMS Institute of Bioscience and Biotechnology Research & Development, Kochi,” said Mr Suresh who was a member of the team which developed the KAU technology for Neera.

He recalls that while the KAU technology of cold chain process was made successful within four years at a cost of less than Rs 1 crore, for the SCMS technology Rs 1.5 crore was coughed up.

KAU’s technology will be patented soon. It is developing Neera at its Kasargod and Vellayani campuses in small quantities of about 200 litres every day.

Dr. Suresh’s wife, Dr. R. Sujatha, associate director under the Coconut Mission at Padanaakkad in Kasaragod, told DC that currently some 400 litres of Neera was produced every day from there. Their technology is also being used in making 1,000 Sip-Ups daily. Sip-Up is ice lolly encased in plastic covers.

It is produced with three-fourths of milk and the rest with Neera and is sold for Rs 10 per product at College of Agriculture, Vellayani, Thiruvananthapuram, which sells like hot cake among students and hundreds of visitors who throng the campus there.

“Neera production is working on the revolving fund mode, including the use of electricity. There is no external fund and we are not running at a loss,” she said.

Mr Shahjahan Kanjiravilayil, chairman of Coconut Production Companies, who runs the Kaipuzha Neera agency at Karunagapally, used to produce about 4,000 litres of Neera per day, after it started production in January 2015.

But now it has come down to hardly 1500 litres per day. Mr Shahjahan who is also the Karshaka Congress Kollam district president, blames the poor marketing strategy of CDB in failing to make Neera available across the state.

“There was boom in Neera sales in the first three years of production. My initial turnover was Rs 3. 60 crore in the first year which dwindled to Rs 1.50 crore whereas I had invested Rs 32 crore in the Neera plant. Now the monthly turnover is hardly Rs 15 lakh,” said Mr Shahjahan who is also president of Kaipuzha Karshaka Padasekhara Samithi, one of the largest paddy cultivation centres in the state.

“I had taken a loan of Rs 1.5 crore from the Kerala Financial Enterprises Ltd and used to produce over 2000 litres of Neera daily. I had 58 Neea technicians and their number has come down to seven. I am hardly producing 200 litres per day now,” said Mr Priyesh Kumar who is also the CPM’s panchayat president at Mararikulam north in Alappuzha.

He could repay his bank loan only four months ago. But he says the lost glory of Neera can be revived if the government shows the will, as there is no point blaming the officials alone.

Agriculture Minister V. S. Sunil Kumar has told Shahjahan Kanjiravilayil to adopt a uniform technology as all the Neera companies are using either cold press process or anti-fermentation solution. A high- level meeting will be held soon to address the issue.