2 Junior Commissioned Officers have been killed, 6 others including a colonel and a girl wounded in terror attack and subsequent fighting. 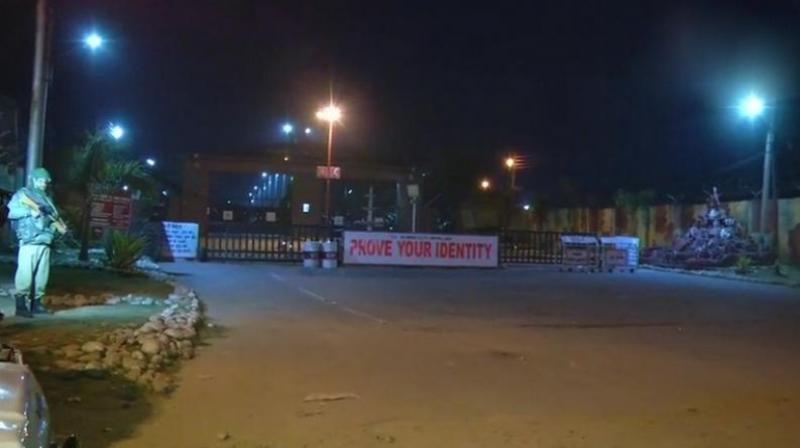 Intelligence inputs had warned an attack on the Army or security establishment by Jaish-e-Mohammed in view of the death anniversary of the 2001 Parliament attack convict Afzal Guru who was hanged on February 9, 2013. (Photo: ANI | Twitter)

Srinagar: The IAF (Indian Air Force) Para commandos have been flown to Jammu to take on “highly motivated terrorists” who stormed an Army camp at Sunjwan in Jammu and Kashmir’s winter capital on Saturday and are since engaged in a fierce gun battle with the security forces.

Two Junior Commissioned Officers (JFOs) have been killed and six others including a colonel and a girl wounded in the predawn terror attack and subsequent fighting. However, unofficial reports said that two children have also been killed during the attack.

The police sources said the attackers believed to be the members of Jaish-e-Mohammad group have split themselves into two groups and one of these has been “isolated” in a corner of a four-storey building. There are conflicting reports about the position of the second group.

Though no militant outfit has admitted responsibility for the attack, the authorities believe Jaish-e-Mohammad is behind it. The security forces authorities had earlier on the basis of intelligence inputs alerted their men in the Kashmir Valley against possible terror strike by the Jaish militants on the death anniversary of 2001 Parliament attack convict Afzal Guru. But they apparently forgot to do it in Jammu as well which is part of the restive State where armed insurgency by Muslim separatists and the tough military campaign by the security forces to crush it have claimed thousands of lives since 1989.

Guru, convicted in the December 13, 2001 Parliament attack case, was hanged to death in Delhi’s Tihar jail on February 9, 2013. The Kashmir Valley had witnessed clashes between stone-pelting mobs and the security forces during a shutdown called by separatists and security clampdown in summer capital Srinagar and Guru’s home town Sopore on Friday to commemorate his hanging. At least, two persons were injured in security forces’ pellet firing on protesters.

The State’s minister for Parliamentary Affairs, Abdul Rehman Veeri, informed the State Assembly, currently in its budget session in the winter capital, that the militants stormed the Sunjwan military station shortly before dawn using the rear side where family quarters are located. He identified the slain JCOs as Subedar Madan Lal Chowdhary and Subedar Muhammad Ashraf Mir. The daughter of another JCO is among the injured.

He termed it as a “fidayeen attack” launched at the Sunjwan Militarty Station of 36 Brigade at around 4:10 am. He said four Army officials and a civilian who were injured in the attack are being treated at Jammu’s Government Medical College Hospital (GMC).

“The whole area has been cordoned off by Army and the security forces and operation is underway as militants have taken refuge in JCO quarters in the area,” he said. He informed the House that during the operation, Colonel Rohit Solanki, Havaldar Abdul Hamid and Lance Naik Bahadur Singh and Neha daughter of Subedar Madan Lal Chowdhary were injured. They were initially taken to Military Hospital Satwari and afterwards shifted to GMC hospital.

Veeri said that the exact number of “Fidayeen” is still not known but, as per the initial call received at Police Control Room (PCR) Jammu at around 4:55 am four to five militants are involved in the attack. He added the PCR Jammu immediately alerted all the concerned police establishments as well as civil administration regarding the incident. “The GMC Jammu has also been informed to be in readiness to deal with any exigency and ensure best medical care to the injured,” he said.

Director General of J&K Police, Shesh Paul Vaid, confirmed that the militants entered the military station from the rear side where family quarters are located. Inspector General of Police (Jammu range) SD Singh Jamwal told reporters in Jammu that around 4.55 am suspicious movement was noticed by the sentry and his bunker was fired upon. “The fire was retaliated. The number of militants isn't known. They've been cornered in one of the family quarters,” he said. He added that after the attack, reinforcements of the Army's special forces and members of the J&K police’s counterinsurgency Special Operations Group (SOG) rushed to the spot and cordoned off the whole area amid a fierce gunfight.

Following the attack, the authorities ordered closure of schools in Sunjwan belt of Jammu city. “We have ordered closure of schools in Sunjwan area as a precautionary measure in the wake of the attack,” a spokesman of the Jammu Divisional Commissioner’s office said. A high alert has been sounded in Jammu and security beefed up in and around the winter capital of the State.

Chief Minister, Mehbooba Mufti, expressed anguish over the militant attack and the loss of life caused in it. In a tweet, she said: “Deeply disturbed by the terrorist attack in Sunjwan today. My heart goes out to the injured & their families”.

Union Home Minister Rajnath Singh spoke to DGP Vaid and took stock of the situation arising out of the terror attack.  According to a tweet by the Home Minister’s Office, Singh sought details from the police chief on the incident during the telephonic conversation. "The DGP has apprised him of the situation. The MHA is closely monitoring the situation," the tweet said.