India   All India  10 Jan 2022  Third wave will have sharp rise in Jan end, but sharp decline in mid-March: Expert
India, All India

Third wave will have sharp rise in Jan end, but sharp decline in mid-March: Expert 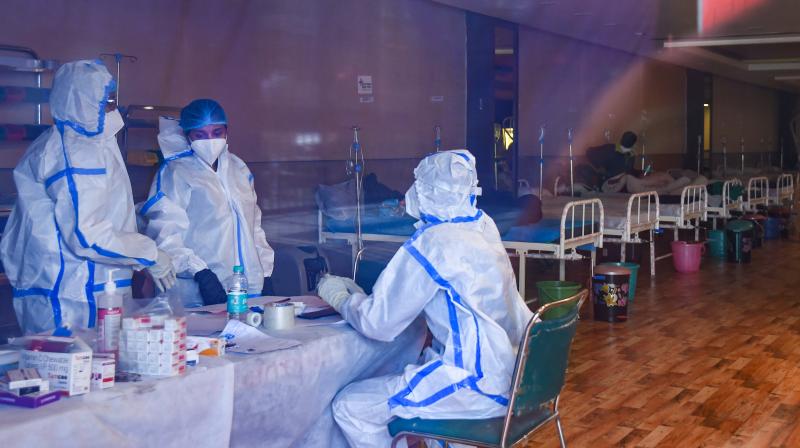 Health workers interact with each other inside the Shehnai Banquet Hall, turned into a COVID-19 care facility, during the third wave in New Delhi. (Photo: PTI)

Kanpur: Amid surge in COVID-19 infections in the country, IIT Kanpur professor Manindra Agrawal on Monday stated that the peak of the infection will hit the nation in the January-end. He also said that the virus cases will overtake the cases recorded during the second wave.

He also informed that the cases will decline very sharply and by March, it will be over.

"As per preliminary data, cases (nationally) will peak by the end of this month and are likely to cross second wave numbers. Since this time the peak is coming up very rapidly, the rise is very sharp," Manindra Agrawal told ANI.

"We expect the decline also to be equally sharp and if the peak hits in January, then by the middle of March, the wave will be over," he said.

The IIT Kanpur professor stated that as Delhi is reporting more than 22,000 cases per day, the national capital will report almost 40,000 cases per day at its peak which is expected to hit in mid-January.

"Cases in Delhi, Mumbai, Kolkata are likely to peak around the middle of this month, in the next few days in fact. But this wave will be almost over by the end of this month in these cities," he said.

Professor Agrawal with other researchers runs the SUTRA computer model that tracks the COVID-19 curve in the country.

India reported 1,79,723 new COVID-19 cases in the last 24 hours, taking the daily positivity rate in the country to 13.29 per cent, according to the Ministry of Health and Family Welfare on Monday.

A total of 4,033 cases of the Omicron variant of coronavirus have been reported so far. Maharashtra has reported the highest number of cases (1,216), followed by Rajasthan (529) and Delhi (513).

The Ministry further informed that the active caseload in the country currently stands at 7,23,619 which accounts for 2.03 per cent of the country's total number of cases.

As many as 46,569 patients recovered from the disease in the last 24 hours.