General Naravane said it has always been his intention to visit Siachen. 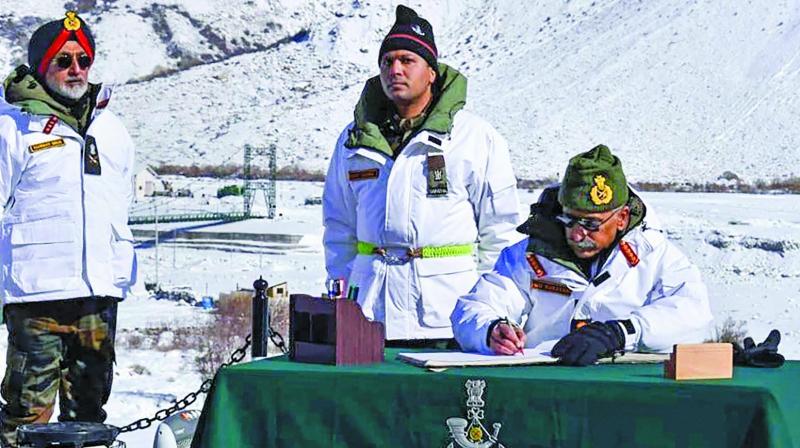 Army Chief General Manoj Mukund Naravane writes in the visitors register after paying homage at the war memorial during his visit to the army base camp in Siachen. (Photo: PTI)

Srinagar: Army Chief General Manoj Mukund Naravane on Thursday visited Siachen to review security situation and overall operational preparedness of troops to tackle any eventuality at what is known as the world’s highest battleground in eastern Ladakh.

Siachen, at a height of 19, 600 feet, has apart from witnessing fighting between the Indian and Pakistani troops intermittently since April 1984, has been the scene of many natural disasters.

This was Gen. Naravane’s maiden visit to Siachen after taking over as Chief of the Army Staff on December 31. He took charge as the Army chief succeeding General Bipin Rawat.

General Naravane said it has always been his intention to visit Siachen. “I am glad that this is my first visit to Siachin as the Army chief,” he added.

Defence spokesman Col. Rajesh Kalia said in Srinagar that Gen. Naravane, who was accompanied by Lt. Gen. Y.K. Joshi, Chief of Staff, HQ, Northern Command, and Lt. Gen. Harinder Singh, General Officer Commanding of Leh-based, ‘Fire & Fury’ Corps, visited forward posts in Siachen sector. “He was briefed on the operational readiness being maintained in the sector by the Commander, Siachen Brigade,” the spokesperson said. He added that the Army Chief also met and interacted with troops deployed at the forward posts in the Siachen sector and “while complimenting them for their tenacity and high morale despite the extreme challenges posed by inclement weather, difficult terrain and super high altitude conditions”, he said that the entire nation “is proud of the soldiers who are deployed in Siachen, defending the territorial integrity of India.” According to the defence spokesperson, the Army Chief “also exhorted them to continue to discharge their duties with the same enthusiasm and zeal and also assured them the full support of the country as well as the Army.”

At the Siachen Base Camp, Gen. Naravane laid a wreath at the iconic Siachen War Memorial.