Many hijras do not transition medically and prefer not to undergo any surgical intervention. 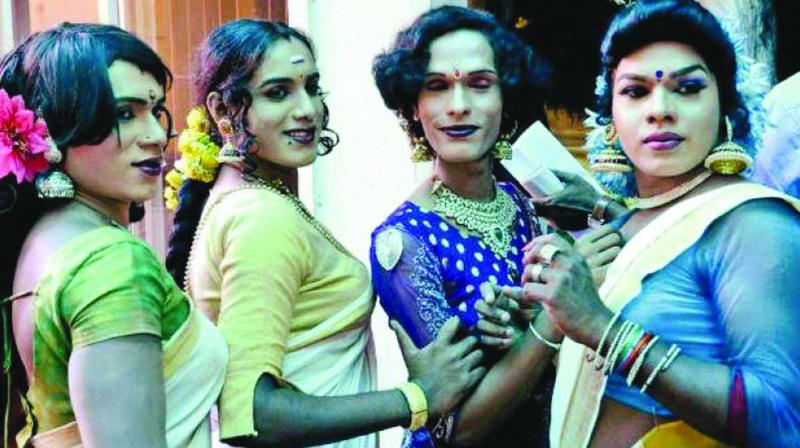 One of the biggest problems with the Protection Rights Bill is that it sets up a screening committee to certify transgender persons, which runs against the right to self-identification recognised in NALSA.

The Trafficking Bill, (Prevention, Protection and Rehabilitation) does not provide the transgender community with equitable alternatives to dignified living

Devotees of Yellamma decorate their forehead by smearing turmeric (haldi) and vermillion (kum-kum). Their body isn’t adorned with expensive jewels. Their crown, earrings and necklace are made of cowries. Through the act of dressing up these male devotees are “caught” or possessed by the Goddess Yellamma, and regarded as holy women. The Goddess enters them and then they belong to a revered priestly class henceforth. The Jogappa community, which is one of the oldest and yet least known transgender communities of Karnataka, indicates that the transgender community is as old as Indian civilisation itself.

However, contemporary India seems to have been in denial about the presence of transgendered folks as part of its social fabric. Relegated to the margins of society, the trans, hijra or kinner community, as they are traditionally known, have made their living begging and singing at births and weddings for centuries in India. They are often seen begging at traffic lights and their resounding clap is both powerful and intimidating. It often makes people part with their money. While many are uncomfortable with this form of begging, the truth is that currently the hijra community have little or no alternative means of earning a living.

Until recently, they have not had basic human rights, health rights and no protection against the amount of violence they face at every juncture of their lives, whether it is from the state, the law or in their inter-personal relationships. We all know that many hijras take up sex work as a means of earning and they are often exploited and subject to violence during these transactions, which is essentially deemed illegal. However, by just passing a bill that prevents sex work, we are actually making it worse rather than bettering their lives.

The trans community is currently grappling with an ambiguous Trafficking Bill, (Prevention, Protection and Rehabilitation) under which, begging and sex work will be made criminal offences. While on the surface of it this might seem like a bill that seeks to stamp out the inequalities that begging and sex work engender, in truth, the rehabilitation aspect of this bill has not been looked into. Before taking away the one means of livelihood of any community, it is imperative and incumbent upon the government to look into viable means of earning to make the transition from begging and sex work to the other professions offered to the community.

Moreover, it contradicts rather than protects many of the rights laid out in the country’s Supreme Court NALSA (National Legal Services Authority) verdict of 2014. For those of us who are not in the know, the NALSA judgment of 2014 was welcomed by the LGBTIQH (Lesbian Gay Bisexual Transgendered Intersex, Queer and Hijra) community despite certain over-simplifications. Under this law, the Supreme Court affirmed the constitutional rights and freedoms of transgender persons to self-identify their gender identity, without having to undergo any medical tests. This included those who identify as third gender, gender-queer, kinnar, hijra, intersex, MTF (male to female), FTM (female to male) to those who identify PAFAB (Persons Assigned Female at Birth) or just those who are gender non-conformists.

While NALSA upholds the law to self-identify, this new protection bill seeks to make it mandatory to have an “objective criteria” (read medical test) to determine one’s gender in order to be eligible for entitlements under the verdict.

There are many permutations and combinations to this endless alphabet soup of gender identities which is rich and ever unfolding and I do not claim to know all of them. However, what I do know is that in any scenario of so called “rehabilitation,” it is only humane and just to make sure that the people who are being “rehabilitated” agree with the manner in which you propose to do it. Top-down laws are seldom effective and the Trafficking Bill was clearly not drafted in consultation with the hijra and trans community. It certainly does not provide or talk of alternative professions.

On December 28, 2018, groups of people belonging to the trans community, gathered to protest at Jantar Mantar against this lack of empathy and poorly researched nature of the bill that would take away two of the only forms of their livelihood, without providing any alternatives. Some of the critiques of the Protection Rights Bill that came up are as follows: It distorts the definition of “transgender” laid out in the judgment, it does not adopt a rights-based approach, it does not include provisions on reservations or properly identify what discrimination stands for.

One of the biggest problems with the Protection Rights Bill is that it sets up a screening committee to certify transgender persons, which runs against the right to self-identification recognised in NALSA. Moreover, the committee includes a medical professional, which serves no purpose other than further pathologising transgender identities. To return to the story of the Jogappas of Karnataka, we might notice that it is simply the act of wearing the garments ascribed to Yellamma and through ritual and prayer that the transformation happens. Why would one want to bring medical science into an act that is spiritual?

Many hijras do not transition medically and prefer not to undergo any surgical intervention. Some do. However, the decision to change their bodies should only lie with them and not be awarded to some state agency or a committee of medical professionals who are not understanding or empathetic of a hijra’s journey and their lived realities.

Any law that professes to protect a community needs to evolve around the persons it claims to protect and it should not be the other way around. It would serve the law makers well to have hijra representation on their board; they need to workshop and consult with members of the community before passing a bill that in effect makes it impossible for the community to grow and to flourish. While some hijra or trans persons have managed to get jobs in beauty parlours or work in the fashion industry, this is the exception rather than the norm. What are we offering the daughters of Yellamma, but a life of penury and stigma, with this new bill?

The views expressed here are personal.