New Delhi has already made it clear that talks and terror cannot go together and has demanded Islamabad stop its policy of supporting terrorism. 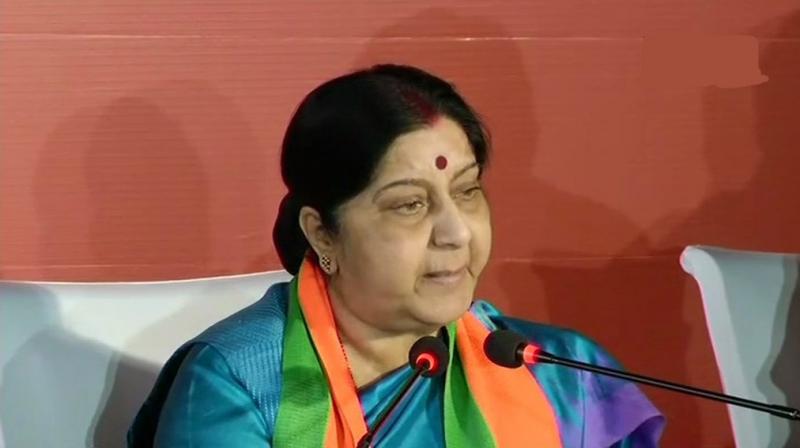 New Delhi: In a veiled indication towards Pakistan, external affairs Minister Sushma Swaraj on Wednesday said that “unresolved border issues can be resolved bilaterally, when approached in the right spirit and, in an atmosphere free from violence and hostility”. Speaking at the Raisina Dialogue conference in the Capital, the Minister also drew attention to the menace of terrorism sponsored by countries. New Delhi has already made it clear that talks and terror cannot go together and has demanded Islamabad stop its policy of supporting terrorism.

In her speech at the conference on Wednesday, Ms Swaraj said, “... Our commitment to upholding territorial integrity and sovereignty remains unwavering. Our consistent message is that unresolved border issues can be resolved bilaterally, when approached in the right spirit and, in an atmosphere free from violence and hostility.”

On the menace of terrorism, she said, “There was a time when India would talk about terrorism, and it would be treated as a law and order issue on many global platforms. Today, no country, big or small, is immune from this existential threat, particularly, terrorism actively supported and sponsored by states. In this digital age, the challenge is even greater, with a greater vulnerability to radicalisation.”

She added, “As far back as 1996, India proposed a draft Comprehensive Convention on International Terrorism we call it CCIT at the UN, it remains a draft to this day, because we cannot agree on a common definition. Ensuring zero-tolerance towards terrorism, and those who use it as an instrument of convenience, is the need of the hour.”

On India’s foreign policy, the minister said, “First, we have rebuilt India’s bridges, both literally and figuratively speaking, with its immediate and extended neighbourhood. We have devoted a much higher level of resources and attention to our neighbourhood, not only when it comes to formal diplomatic engagements but also in pushing next generation regional connectivity and critical infrastructure, and also at times of distress and need.”

“Second, we are shaping our relationships in a manner that synchronises with India’s economic priorities. With this “diplomacy for development” approach, each global interaction is now focused on building partnerships to promote our transformative flagship programmes such as Make in India, Smart Cities, Digital India, AMRUT and Namami Gange,” she added.